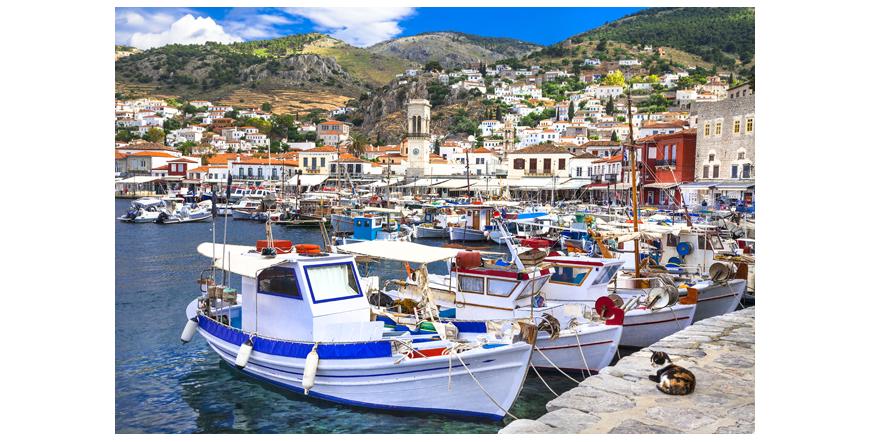 Hydra Island is one of the Saronic Islands of Greece. It is believed that Hydra has been inhabited since ancient times. Its name comes from one of its geographical features - in the past, the whole was dotted with hundreds of beautiful freshwater sources of drinking water. Hydra has never been associated with a God, a hero, a mythological event or any of the many Greek legends, as over the years it has lost its inhabitants who fled from pirate raids. Discovered by shepherds in the nineteenth century, it was only in the sixteenth century that refugees seeking refuge from Turkish persecution began to arrive here. As their livelihood and way of survival, they developed fishing. In the nineteenth century, Hydra was home to about 10,000 sailors, and today its indigenous inhabitants number 2,700 people.
The population of the island is concentrated in Hydra Port - a beautiful semicircular port city. The port shelters all the shops, galleries, restaurants and markets, and the rocky hills - houses and hotels. Other small villages on the island of Hydra were Kamini, Bishops, Mandraki, Milos and Palamidas, which are also open to visitors. Hydra is mainly supported by tourism. In summer, Hydra welcomes thousands of guests who cannot resist its romantic charm, its unspoilt beauty, the spirit floating through the narrow stone streets and the natural hospitality of the locals.
On the island, all vehicles were driven out. Those who want to go somewhere either have to walk on foot, or stand on the back of a donkey, which skillfully climbs through narrow and steep streets. More remote places on the island are served by a water taxi or a water bus. The appearance of the island of Hydra on the tourist map, as well as on the map of Europe, is built from several of its main advantages. It has been known since the past that Hydra is a famous meeting place for artists, artists, writers and celebrities. Hydra remains one of the most fashionable and stylish places in Greece. Also, we should not lose sight of the fact that Hydra Island is a popular place for yachting. One glance is enough to see how the port of Kamini is crowded with luxury yachts.
Among other things, Hydra is also a very suitable place for romantics. It's like time has stopped. Arriving on the island of Hydra, a person manages to stop the restless rhythm of his life and pamper himself with dreams and passion.