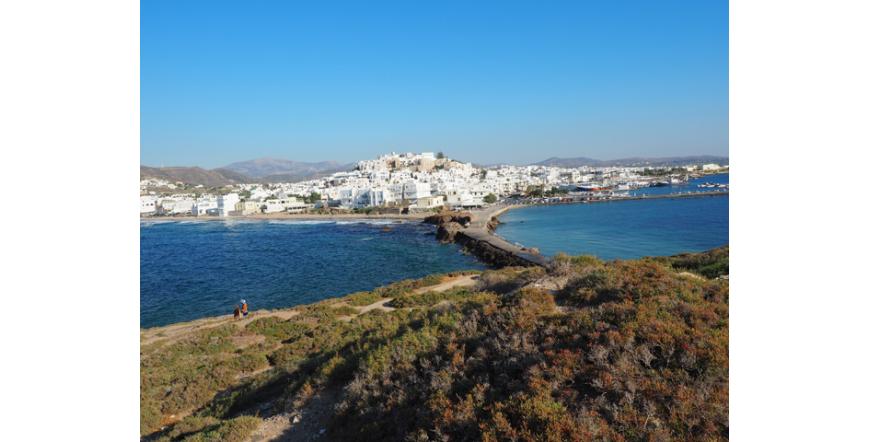 Naxos is a Greek island, the largest and most fertile from all of the Cycladic islands in the Aegean Sea. With a coastline of 91 km, Naxos is 191 km from the port of Piraeus and 162 km from the port of Rafina. Naxos in ancient times was the center of Cycladic civilization. Naxos Island is a popular tourist destination with several easily accessible archeological objects. The locals and visitors of Naxos Island are pleased as it has many beautiful beaches - Agia Ana, Agios Prokopios, Alyko, Kastraki, Mikri Vigla, Plaka and Agios Georgios, each close to Chora. Chora is the largest city and center of the island, sometimes called the city of Naxos.
The capital Naxos is a typical Greek city, with narrow, shady streets. Its appearance is due to snow-white buildings with flat roofs and thick walls. Its streets are colorful and lively with cafes and restaurants, which are extremely attractive places for relaxation for many tourists. The churches of Naxos are its greatest pride and its greatest landmarks. They are clear proof that the Greeks are among the most religious people in Europe. In the northern part of the city is the port, which is very important for transport connections on the island. Naxos is not the only settlement on the island. Among the dry and baked by the hot Mediterranean sun landscapes of the island are nestled many idyllic villages.
Tourists prefer the island of Naxos because of the number of magnificent beaches on the island. This series begins with the beach "Agios Georgios", which is located in the capital. Most hotels in the capital are close to this beach. The sights of the capital of Naxos do not end here. The first is the island of Palatia in the port, with the ruins of the temple of Apollo. This impressive project dates from the 5th century, but has been left unfinished.
Today, only the foundations and the gate (Portara) remain, which is the business card of the island. And this is no accident. Thanks to its, Naxos won fans. One of the favorite activities of tourists is a walk on the artificial isthmus between the Palatia and the main island. The resting people walk in the evening to the temple to recharge with the energy of the ancient Greek gods and to admire the sunset. The upper part of the temple hill attracts people with a panorama that opens to the main part of Chora. This clearly distinguishes the three levels of the hill.
The lowest level is occupied by a modern promenade, which is full of taverns, shops, banks. The middle level is ceded to the historical part of Hora - Burgas. Traces of Cycladic architecture are sealed in it. The highest level of the capital Naxos is occupied by its historic part - Castro. The gray Castro contrasts with the white Burga. This is a medieval castle built by the Venetian rulers on the island of Naxos. Last but not least, the tourist jewel Naxos wins over its guests with the culinary journey through the Greek cuisine, which is guaranteed in every corner of the island.