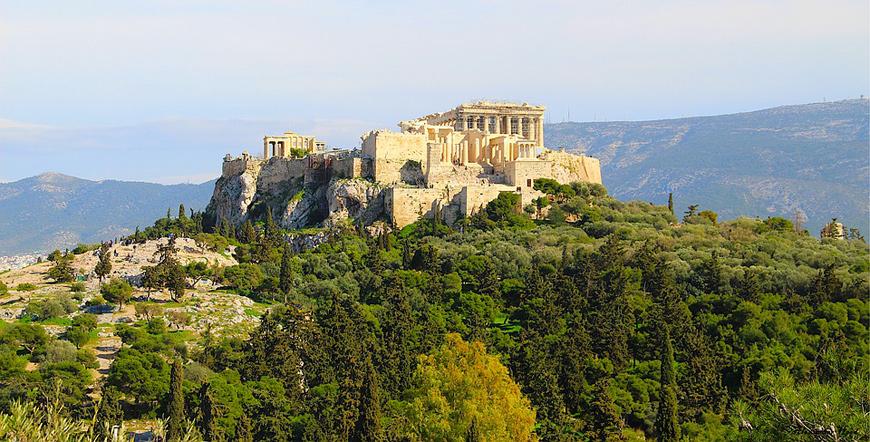 Greece occupies the southernmost part of the Balkan Peninsula. The country also has thousands of islands, scattered in the Ionian, the Mediterranean and the Aegean Sea. The picturesque Peloponnesus Peninsula is severed from mainland Greece with the excavation of the Corinth Canal, which shortens the way between the Aegean and the Ionian Sea.

The relief of Greece is mostly mountainous. Here is located the mythical mountain of the gods – Olympus. The climate of Greece is subtropical-Mediterranean with mild, humid winter and sunny, hot and arid summer. There are bigger rivers only in Northern Greece, where the lower parts of the big Balkan rivers are – the Maritsa, the Mesta, the struma and the Vardar. A big part of Greece’s area is covered with mixed forests in the mountains and xerophytic forests and bushes on the steep shorelines.

Almost 1/5 of Greece’s area is accounted for by over 3,000 islands, of which 170 are inhabited. The most numerous are the islands in the Aegean Sea. The largest of them is the Euboea Island. In the Ionian Sea the bigger islands are Kephalonia, Kerkyra, Lefkas, Zakinthos, Ithaka (the island of the mythical Odissey). The largest island is Crete – the fifth largest in the Mediterranean.
The arable lands in Greece are little and about 1/5 of the people are employed in agriculture. Due to the hot climate agriculture is specialised in growing different thermophyles – rice, cotton, tobacco, olives (ranking third in the world after Spain and Italy), citrus fruits, sesame, vineyards, early vegetables, etc. Greece is the first Balkan country member of EU since 1981. In economic aspect Greece relies mainly on tourism. The basic industrial branches are food processing industry (olive oil, wine, fish tinning, fruits and vegetables), light industry (textile, shoes), etc. The Greek merchant navy is one of the biggest in the world – it consists of more than 3,500 ships.

Located at the Saronic Gulf, about 8 km inside the mainland, the city of Piraeus has been the port of Athens for more than 2,500 years. Today it is the biggest Greek port.

In the entire Greece today are preserved archeological monuments, historical and architectural landmarks from the ancient Greek, Roman and Byzantine age.

The symbol of the capital city Athens is the Acropolis – a high hill on which the ruins of the majestic Parthenon are seen. The temple was built in 6 BC in honour of the goddess Athena, patroness of the ancient Greek city-state of Athens, where great philosophers like Plato and Aristotle, Sophocles and Euripides worked.

News and events from Greece