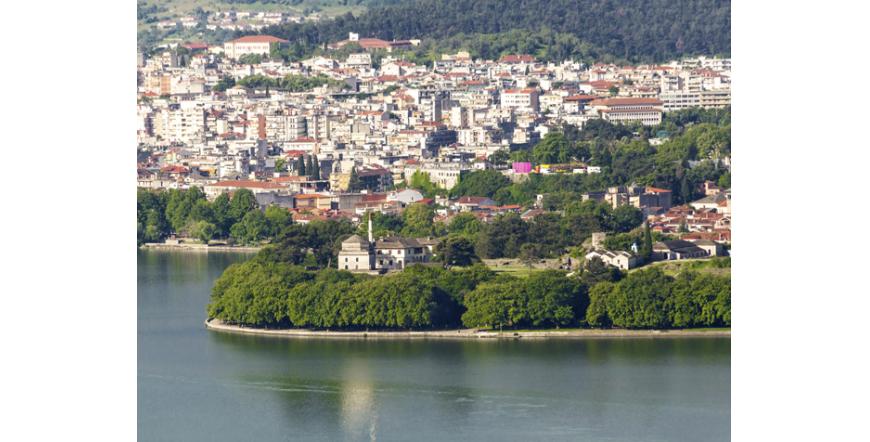 Ioannina, often called Yannena, in Greece is the capital and largest city of the regional unit of Ioannina and Epirus, which is an administrative region in northwestern Greece. It is located at an altitude of about 500 meters above the western shore of Lake Pamvotis. Ioannina, also called Yannena, is located 410 km northwest of Athens, 260 km southwest of Thessaloniki and 80 km east of the port of Igoumenitsa in the Ionian Sea.
The emblem of the city of Ioannina consists of a portrait of the Byzantine Emperor Justinian, crowned by a stylized image of the nearby ancient theater of Dodona.
The founding of Ioannina is attributed to the Byzantine emperor Justinian in the 6th century AD. Ioannina (Yannena) flourished during the late Byzantine period (XIII-XV centuries). After the Fourth Crusade, the city became part of the Epirus despot and many wealthy Byzantine families fled there. Ioannina (Yannena) was handed over to the Ottomans in 1430 and until 1868 was the administrative center of Pashalik. Between the 18th and 19th centuries, Ioannina was a major center of modern Greek enlightenment. Ioannina (Yannena) was handed over to Greece in 1913 after the end of the Balkan War.
The official name of the city, Ioannina is probably a compilation of Agianina or Agianea, and had to be associated with the creation of a monastery dedicated to St. John the Baptist, around which the settlement was later founded (in the area of ​​the present castle of Ioannina). According to another theory, the city was named after Ioannina, daughter of Belisarius, general of Emperor Justinian. Ioannina (Ioannina) was included in the Greek state on 21th February 1913 after the battle of Byzantium during the First Balkan War. On the day the city came under Greek control, aviator Christos Adamidis, a native of Ioannina, landed Maurice Farman's biplane MF.7 in the square in front of the town hall.
In 1922, the Muslim population was replaced by Greek refugees from Asia Minor. A small Muslim community of Albanian origin continued to live in Ioannina after the exchange, with 20 families counted in 1940 and only 8 in 1973.
In 1940, the conquest of Ioannina became one of the main goals of the Italian army. However, the Greek defense at Kalpaki repulsed the Italians. In April 1941, Ioannina was bombed by German forces, even during negotiations leading to the capitulation of the Greek army. During the ensuing occupation of Greece, the city's Jewish community was "crushed" by the Germans in 1944, with most of them killed in concentration camps.
One of the largest and most popular sights of Ioannina is the inhabited island of Pamvotis, also called the island of Ioannina. The island is located on a "short ferry trip" from the mainland and can be reached by small motor boats operating at different intervals depending on the season. The monastery of St. Panteleimon, where Ali Pasha spent his last days waiting for a pardon from the sultan, is now a museum that houses artifacts and remains from his period.
There are six monasteries on the island: the monastery of St. Nicholas Stratigopoulou from the 11th century, the monastery of St. Nicholas Filanthropinon from 1292, St. John the Baptist from 1506, Eleus from 1570, St. Panteleimon from the 17th century and the Transfiguration of Christ from 1851. The winding streets of the island are home to many gift shops, taverns, churches and bakeries.
Located on the southeastern tip of the city, on a rocky peninsula on Lake Pamvotis, Castle of Ioannina was the administrative heart of the Epirus despot and Ottoman vilayet. Castle of Ioannina was constantly used until the end of the Ottoman Empire and the fortifications have undergone several modifications over the centuries. The most extensive changes were made during the reign of Ali Pasha and were completed in 1815. Within the walls of the castle are several monuments such as Byzantine baths, Ottoman baths, the Ottoman library and the Safari Palace.
There are two citadels in the Castle of Ioannina. The southeastern citadel is the place of the Fethiye Mosque, the tomb of Ali Pasha and the Byzantine Museum. The northeastern citadel is occupied by the Aslan Pasha Mosque and contains several other Ottoman monuments. The old Jewish synagogue of Ioannina is located in the castle walls and is one of the oldest and largest buildings of this type that has survived in Greece.
Several religious and secular monuments in Ioannina survive from the Ottoman period. In addition to the two mosques located in Ioannina Castle, two other mosques have been preserved outside its walls. The mosque and madrassa of Veli Pasha are centrally located in the city, and the Kaloutsiani mosque is located in the area around the city. The now-abandoned "archbishop's house", located near the football stadium, is the only old house that survived the fire of 1820.
Some of the main sights in the center of Ioannina also date from the late Ottoman rule. The Ioannina Municipal Clock Tower, designed by local architect Pericles Meliratos, was built in 1905 to celebrate the anniversary of Sultan Abdul Hamid II, and the adjacent building, which houses the headquarters of the VIII Division, dates from the late XIX century. Some neoclassical buildings, such as the Post Office, the Zosimaia Old School, the Papazogleios Weaving School and the former Trade School, also date from the late Ottoman period. In addition, several arcades are preserved, located in the old shopping center of the city such as Stoa Luli and Stoa Liampei.
The Churches of the Assumption of Holy Mary of Perivleptos, St. Nicholas of Kopanon and St. Marina were restored in the 50s of the twentieth century with funds from Nikolaos Zosimas and his brothers, following the lines of the original forms of the churches, destroyed in the great fire of 1820. The Cathedral of St. Athanasius, which is a three-nave basilica, was completed in 1933. It was built on the foundations of the former Orthodox cathedral, also destroyed in fires in 1820.