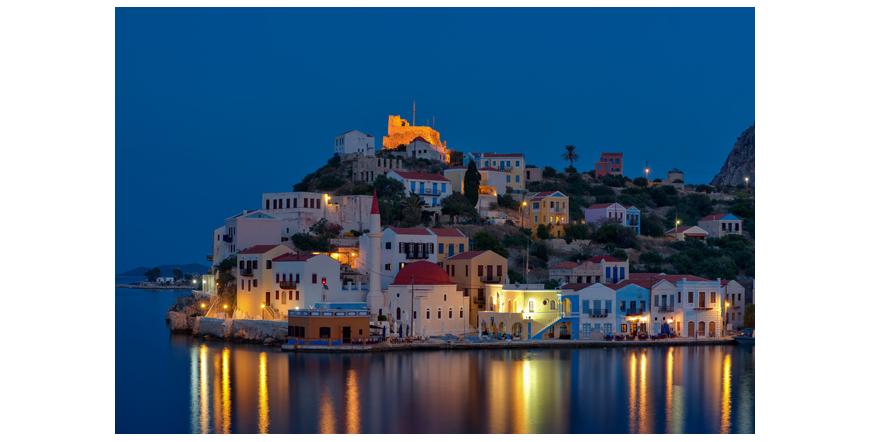 The island of Kastellorizo ​​is located just over a mile from the Turkish coast, east of the island of Rhodes and is the southeastern border of Greece. The island has an area of ​​8.9 sq. km and a length of 19.5 km. The population of Kastellorizo ​​is about 400. The island is 328 nautical miles from Piraeus and 150 miles from Cyprus. The island has hosted many cultural, political and economic events, but it is world-famous for its Oscar-winning film Mediterraneo, which was shot on the island of Kastellorizo. In 2003, a meeting of all European foreign ministers took place here.
A successful advertisement on the Greek island of Kastellorizo ​​should include everything that is revealed to the eyes when approaching the island - the amazing picturesque view of a small fairytale port. Houses decorated with colorful doors and windows, and domes of churches, uniquely reflected in the crystal clear waters of the Aegean Sea. Sun, whose bright rays enhance the uniqueness of the landscape and give warmth and coziness. Neoclassical houses with wooden balconies and tiled roofs that have been preserved to tell the story of centuries-old traditions and ancient Greek culture. It sounds like a fairy tale, but this heavenly place exists.
Many will think that behind this charming facade lies a large island, but this is not the case. Kastellorizo ​​is the smallest island of the Dodecanese Islands. The island of Kastellorizo ​​is 70 nautical miles east of the Turkish coast at Kash and very close to Rhodes.
There is only town on the island and it is Kastellorizo, which has a smaller population than its unique architectural landmarks. Undoubtedly the most famous local landmark is the Red Castle. This castle is so iconic for the island that even so its name was born - from the Latin "castelle" (castle) and the Italian "rosso" (red). The Red Castle was built in the 14th century by the Knights of the Order of St. John, also called the Knights of Rhodes. In addition to his posture, Dorian inscriptions carved into the rocks make a strong impression, evidence of more ancient inhabitants and going back even further in history.
A sightseeing tour of the island of Kastellorizo ​​must include the monastery of Agios Georgios with the underground church of Agios Haralambos, as well as the church of Agios Konstantinos and Eleni with impressive granite columns, for which the material was delivered from Anatolia. There is an architectural and folklore museum in Kastellorizo.
The whole antiquity of Kastellorizo ​​and all the evidence of rich local culture exist in perfect harmony with the nature of the island. Those who want to catch a memorable sight should head to the Blue Cave. It offers one of the most beautiful views of the island. The blue cave owes its name to the unique play of the sun's rays, which are refracted through the water and paint the entrance in phosphorescent blue light.