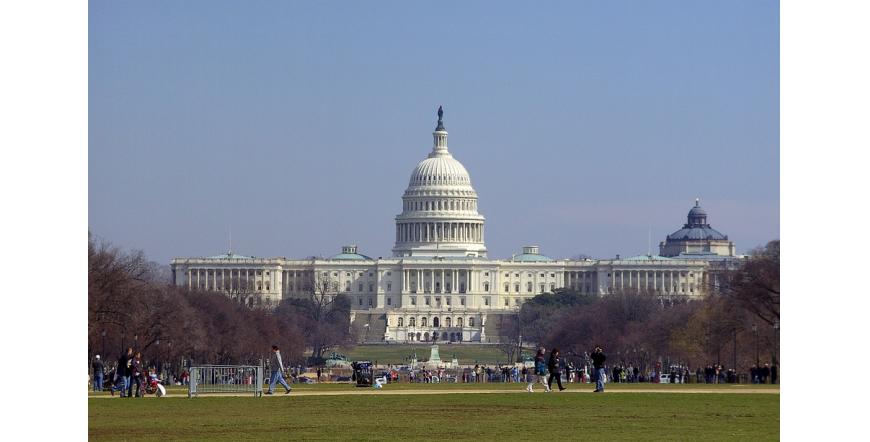 The imposing white building at the centre of the capital of the USA Washington is a symbol of the government and legislative authority of the United States. The Capitol is situated on the Jenkins Hill and is an audacious architectural experiment, which materialized the first American president George Washington’s desire for grandeur, beauty and sophistication of this significant state institution. The name Capitol comes from the Roman Capitol hill, a political centre of Rome.

The place for building of the Capitol was chosen by George Washington together with the mayor Pier d’Enffant. The competition for the design was carried out in 1792 and was won by the Irish Dr William Thornton, since his design was inspired by the architecture of the Louvre and Paris pantheon. The main stone was put symbolically by George Washington on 18 September 1793. The building was being built many years and its current appearance is due to the work of several architects. The first president, who was sworn in the Capitol was Thomas Jefferson on 4 March 1801. During the British-American war in 1814 the Capitol was seriously destroyed. After a restoration the building of the Capitol looks even more beautiful and impressive. There have been added two extra wings, as the Senate is accommodated in the north wing, and the Chamber of representatives - in the south.

The new cast iron cupola is 57 m high and three times larger than the old one, which was wooden, and built by Thomas Walter. The 6 meter bronze statue of the “Armed statue of liberty” is raising up on its top. The Capitol is a five floor building in its nowadays appearance, 88 m high, without a cupola, its length is 229 m, and the width - 107 m. A small repair of the east front part was necessary at the beginning of the 20-th century. As a whole the appearance of the Capitol reminds the influence of Saint Pavel cathedral in London and the basilica Saint Peter in Rome. Now replicas of the Capitol in Washington can be seen almost in all states of the USA.

The most impressive landmarks of the Capitol are the Rotunda, the Big cupola hall and the National sculpture hall. Eight large paintings of famous artists, which reflect the development of the USA as a nation are arranged in the Rotunda. An eminent landmark in the Big cupola hall is the fresco Apotheosis of Washington, which is surrounded by the Olympic gods. This sign of respect to the first president, leading the country to liberation, is a deed of the Greek-Italian artist Konstantin Bromide from 1865. The surrounding frieze represents the history of the USA from its discovery by Christopher Columbus until the flight of the first American aviators – the Wright brothers. The statues hall contains a statues collection of historical persons, who are important for each state.

There is a lift and a metal ladder with 365 steps (each step is a day of the year) from the underground floor, which leads to an open platform, from where a gorgeous view to the city and park around the Capitol is revealed. The garden occupies area of 53 hectares and is designed by the landscape architect Frederik Low Olmsted. Rare trees can be met in it, and there are blossoming flowers during the whole year. The imposing monument of George Washington is raising up in the park, which is called National mall.

The state paying of respects in front of the mortal remains of the presidents: Abraham Lincoln, James Garfield, William McKinley, John Kennedy, Herbert Hoover, Dwight Eisenhower, Lindon Johnson, Ronald Reagan and Gerald Ford were carried out in the building of the Capitol. On 19 December 1960 the Capitol was announced for a national monument. And the visiting of this complex, a symbol of strength and prestige of the USA, is free of charge.

Vote:
Rating 5 from 1 voted The Capitol