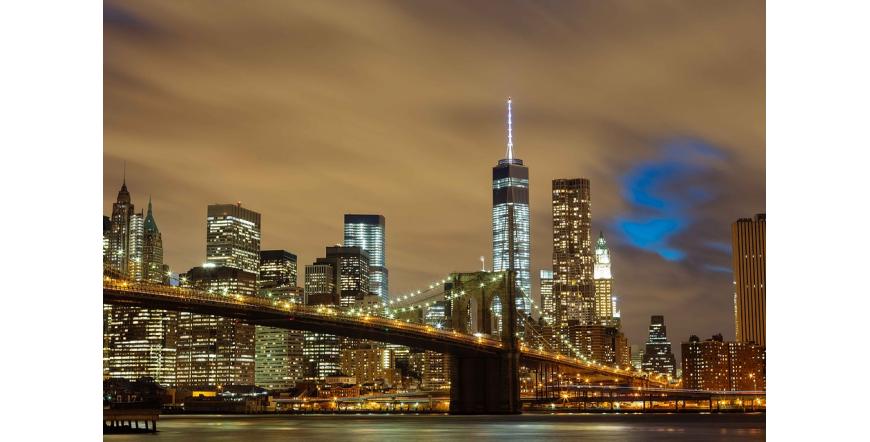 The Brooklyn Bridge is one exceptional architectural achievement, which is popular in the whole world. Crossing the East River, it connects two residential areas of New York – Brooklyn and Manhattan. The length of this magnificent hanging bridge, which has produced a sensation in that time, is 1834 m and is one of the seven bridges, which have been built over the river after the building of the Brooklyn Bridge. The width of the bridge is 26 m, and in the highest place above the East River it raises at 41 m. There are three lanes for traffic, as the two end ones are specified for movement of automobiles, and the middle lane – is intended for pedestrians and cyclists.

The creation of the bridge became necessary in the beginning of the 19 century, when New York reached its flourishing and the business centres attracted many people. The moving between the two big residential areas of New York became more and more difficult. The competition for a bridge, connecting the two prestigious residential areas, was announced in 1855, but several years passed in its discussing. While in 1869 the building of the bridge was assigned to John Roebling, a German immigrant - Engineer, who invented the twisted steel rope in 1841, which turned into one of the leading construction elements of his project. Roebling has a series of hanging bridge constructions behind his back, including also the bridge Cincinnati – Covington. He designed the Brooklyn Bridge with a six times bigger carrying capacity, than it was necessary, which explains in fact why this equipment carries the enormous traffic of the 21 century until now.

The construction of the Brooklyn Bridge began in January 1870 and John Roebling was happy that he created such a spectacular project, which began to realize in the country of his dreams. But unfortunately at the beginning of the construction he died. His son Washington Roebling, who also was an architect as per profession, continued his deed. But the difficult labour conditions at the subsoiling of the river bottom, deprived of health Washington very soon. But despite this, the construction works continued in the next 13 years. The amounts, which were invested in the realization of the construction, are around 15 million dollars. Washington Roebling was rooted in a wheelchair and he managed the construction from his home with the assistance of his wife Emily. Thanks to the stubbornness of the two spouses and their unshakeable faith, the Brooklyn Bridge became one of the major symbols of New York. The two towers of the bridge, through which the steel ropes are stretched, were built in a Gothic style and are at height 83 m over the East River. There has been intended a place for a railway line and tramway. The opening of the Brooklyn Bridge was on 24 May 1883 as at the ceremony was present the 21-st president of the United States – Chester Arthur. But after there has been a rumour, that the bridge was not steady enough, the management of the city decided to use a herd of elephants, possessed by the circus, which visited the city at that time. The row of lorries with 21 elephants passed along the bridge in the two directions. This spectacle achieved the necessary effect and people started to use it.

Nowadays, there are three lanes in both roadways for traffic of automobiles on the Brooklyn Bridge. Around 125 thousand vehicles, 4 thousand pedestrians and 2,6 thousand cyclists pass on it every day. The bridge is used also as a stage of many popular films like Godzilla and Monstro. The numerous tourists with cameras, who are always there, desire to preserve in their memory the visit of the Brooklyn Bridge, which already 134 years is considered for an industrial wonder of the world. Being on it, a person enjoys the imposing hanging bridge, which was created by human hands and built in time, when the automobiles were rarity.