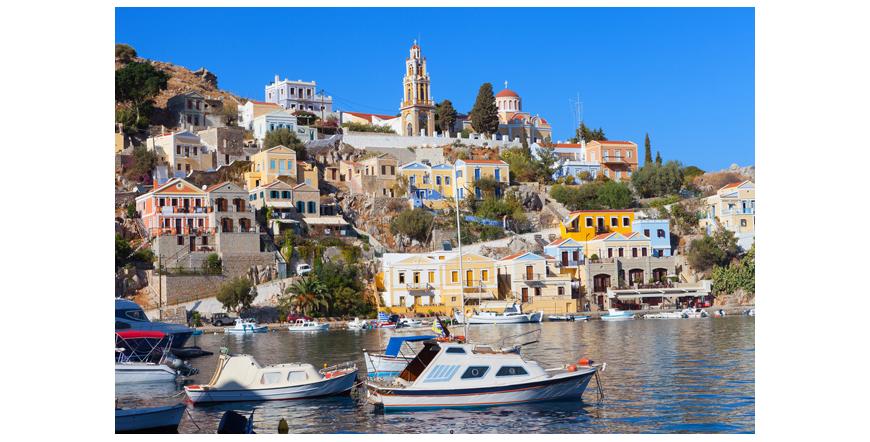 Symi Island is part of the Dodecanese group and is located between the island of Rhodes and Turkey. It covers an area of ​​58.1 square kilometers and is 255 miles from Athens, 23 miles from Rhodes and 3.5 miles from Turkey. Simy has a horseshoe shape and about 2600 inhabitants, some of whom live in the upper part of the island. Symi is an extremely picturesque island, frozen in the timelessness between the past and the present. It is located near mainland Turkey and is a paradise for photographers. Symi is a rocky mountain island. Due to the relief and the limited space, the houses on the island are perched on top of each other on the slopes and give it a unique charm. There is a steep road on which it is possible to move motor vehicles, otherwise you can reach stairs everywhere.
Symi Island itself is relatively small. On an area of ​​about 57 sq. km. are scattered interesting small caves among the rocky beautiful beaches, a rich collection of sights and picturesque villages. In 1373 the Knights of St. John took over Symi and trade and shipping flourished. They developed shipbuilding and the extraction of sponges from the seabed. In the 19th century, Symi Island became the world's largest sponge port. Today, this craft still feeds much of the island's inhabitants.
The capital of the island of Symi is located in its northern part and has the same name, being divided into an upper part, named Chorio, and a lower part. The two parts are connected by the 350 steps of Kali Strata and form an attractive whole. Kali Strata is extremely picturesque with its perched neoclassical houses in pastel colors and flower gardens. The locals of the town of Symi are hereditary skilled woodcarvers. One of the famous landmarks on Symi Island is located at the highest point of Chorio. It is about the castle of the Knights of St. John, whose emblem can be seen high above the main entrance. It can be reached by 500 steps, again in neoclassical style.
There is an archeological and folklore museum in Chorio, which offers interesting expositions of artifacts. In addition, the restored house of the wealthy Hadziagapitos family has been turned into a kind of museum. The lower part of the city of Symi has embraced the port and stands out very well against the amphitheater against the flooded hills.
Symi Island is extremely popular with the historic monastery of St. Archangel Michael near Panormitis, which houses a miraculous icon. The monastery is located on the southwest coast of the island and is an important pilgrimage destination visited by Greeks from all over the country. The Monastery of St. Archangel Michael has a beautiful iconostasis, masterful Byzantine frescoes and two museums with a remarkable library.
While speaking for monasteries, it's time to talk about the churches on the island of Symi. It has many beautiful churches and monasteries, some of which are accessible only by boat. For example, the monastery "Megalo Sotiris" is a very interesting building that should be visited because of the beautiful views that open from it. Also popular is the Church of Saints Constantine and Helena, perched on the southern slopes of Vigla, with beautiful terraced gardens. A boat trip to see the beautiful coast and find the perfect place for solitude or a picnic would be extremely pleasant. Symi Island can be explored on foot, which is a prerequisite for a journey through beautiful nature.