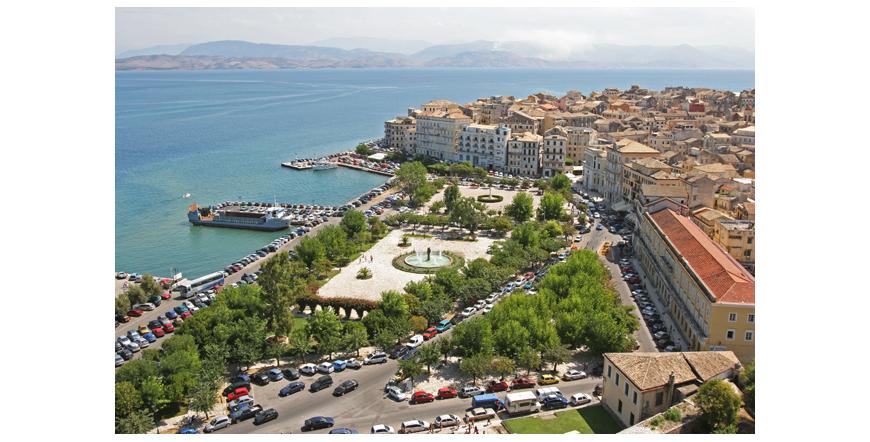 Corfu is a Greek island in the Ionian Sea. It is the second largest of the Ionian Islands and is located near the coast of the Albanian city of Saranda, from which it is separated by only one strait. Its location is close to the coast of the Albanian city. Its shores are washed by the waters of three seas: to the west - the Ionian Sea, to the north - the Adriatic Sea, to the south - the Mediterranean Sea. Due to its interesting location the island has a unique climate. The island has an area of ​​641 square kilometers, length 58 km and width in the widest part 27 km. The northern part of Corfu is mountainous and the southern part is occupied by plains. Due to its interesting location, the island of Corfu has a unique climate.
The highest peak here is Pantokrator with a height of 906 m. The largest city with a population of about 28,200 inhabitants is also called Corfu. It is typical for the Greek islands to have legends from ancient Greek mythology. The fact that, like any other Greek island, this one is connected with the ancient Greek mythology, and more precisely with the love of Poseidon for the daughter of the river god Azop - Corfu, is not considered atypical. According to legend, Poseidon, with the help of Zeus, kidnaps her and takes her to the hitherto unnamed island. To prove his immeasurable love, he baptized the island of Corfu in honor of his beloved, who gave birth to his son Feax.
The past of the island of Corfu is an eventful story. Over the centuries, Corfu has aroused the appetite of the Romans, Byzantium, Venice, Naples, France, Austria, Russia and England. Corfu was voluntarily ceded to Greece by England in 1864. The island of Corfu is a very popular tourist destination. This heavenly place on the planet is surrounded by beautiful beaches and attractive sea waters. The appearance of the main city - Corfu or Corfu, is a wonderful remake of exquisite Italian buildings, narrow streets and majestic French arcades
The cultural journey of the visitors of the city passes through museums, and the spiritual one - through interesting churches. One such is the museum with beautiful gardens south of Corfu, which was once the birthplace of British Prince Philip. The Asian Museum, which is located in the former residence of the British Commissioner General, also has a good rating among tourists. Of particular interest is the superb historical museum and the church of Agios Spiridon, where the mummified body of the patron saint on the island of Corfu is laid. Apart from the city of Corfu, tourists book excursions to the beautiful islands of Vlacherna and Pontikonisi.
Seen from above, the north coast of Corfu is admirable. This skillful intertwining of luxury and cheap resorts with fishing villages with a captivating landscape leaves an unforgettable imprint in the minds of everyone who has touched the beauty of the Greek island. The west coast of Corfu is not inferior to the north. The tourism industry has provoked the construction of large hotel conglomerates to make the sandy beaches and the beautiful decor of green mountains accessible.
The heart of the island of Corfu is captivated by traditional, unconquered villages of modern times, which are ready to offer shelter and food to anyone who pays them attention. A walk on the mountain tops rewards with a view of an endless green carpet, flowing into the endless sea blue.