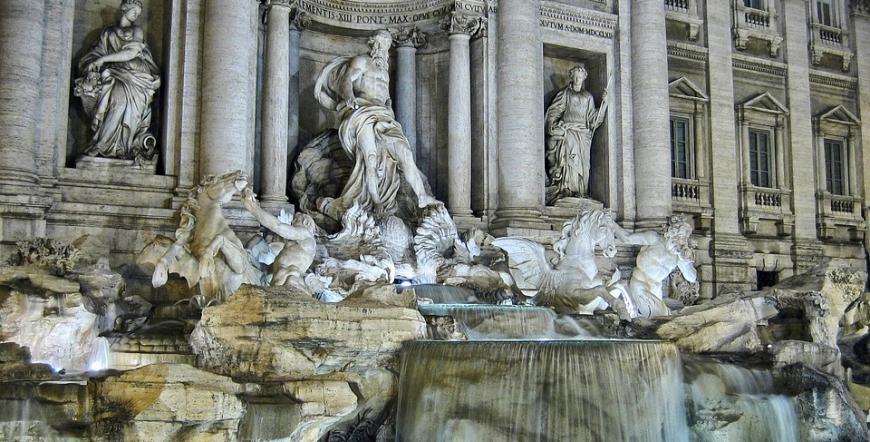 Although slightly trivial, I will begin my story of this unique city as follows: Rome is the capital of beautiful Italy and the region of Lazio. It is located comfortably and picturesquely on the rivers Aniene and Tiber. In the distant past, Rome was the capital of the famous Roman Empire, which no one will dispute is undoubtedly the largest, most powerful and longest-lasting empire in Western civilization. In addition, the city was the center of ancient Rome, and later the Papal States, the Kingdom of Italy and the Italian Republic.
The heart of Rome has been beating for 2,800 years. In addition to its real name, Rome is popular as the Eternal City, the Superb City, and the City of the Seven Hills. The territory of Rome covers a total of 1,285 square kilometers, and the lands stretch all the way to the shores of the Tyrrhenian Sea. One of the specifics of Rome are those large trees, which with their high raised crowns manage to give a wonderful beauty to its streets.
In Rome, one of the main and leading branches of the economy is tourism, but in addition to it, aviation and banking are highly developed. The brilliant detail of the city's historic center is a UNESCO World Heritage Site and is honored for its exquisite statues, charming palaces, thousands of years old basilicas and ancient Roman ruins. The history of Rome began to be written with the emergence of the original settlement of the Seven Hills opposite the ford at Isola Tiberina: Aventine, Palatine, Capitoline, Quirinal, Caelian, Viminal and Esquiline.
Annals say that in April 753 BC Romulus founded the city after killing his brother Remus. The development of Rome was rapid and its peak was in the time of Marcus Aurelius - 161-180 AD. Both the ancient city and today's Rome are based on the same seven hills. The central region is called Campo Marzio and is named after the god of war Mars. That's where the army's training camps were. In addition, there are concentrated and many of the popular attractions.
It would not be an exaggeration to say that Rome has everything: it has its pope, it is popular with its famous artists, rulers, poets, lovers, designers, polenta. In addition, Rome is a place where you can indulge in pleasures such as first-class food, fine wines, shopping, tempting ice cream, sparkling cappuccino and more. As if it were some kind of rice from ancient times, Rome has attracted and continues to attract people for over 2,000 years. This city occupies a leading position in the ranking of the most romantic and majestic cities in the world. Rome has that eclectic and attractive mix of spectacular historical and architectural landmarks and noisy and dynamic life.
Walking through the streets of the city is a kind of time travel and that is why it is worth to get to know slowly, to return to it again and again, to be part of the diverse crowd. The list of places to visit is not short, but the most prominent are the Colosseum, the Vatican Museums, the Doria Palace, the Roman Forum, the Piazza di Spagna, the Trevi Fountain, the Imperial Fora, the Circus Maximus, the Capitol, the Aurelian Wall, the Baths of Caracalla, Victor Emmanuel II Monument, the Trajan's Column, the Pantheon, Piazza Navona, Piazza Venezia, the Pyramid of Cestius and others.
And let's start our brief overview of the sights with perhaps the pearl in the crown of Rome - the St. Peter's Basilica.

This historical and architectural jewel is the most famous example of Renaissance architecture, as well as the largest church in the world. The people who breathed life into this masterpiece are Michelangelo Buonarroti, Carlo Maderno, Donato Bramante and Giovanni Bernini. It is believed that the tomb of St. Peter is located under the magnificent altar in the temple. The Vatican Museums are an extremely popular landmark and are on the list of the most visited museums in the world. The Pinakothek is dedicated to the work of artists such as Caravaggio, Leonardo da Vinci and Raphael. The Pio Clement Museum functions in the name of sculpture.
The Gregorian Egyptian Museum has a rich exhibition of artifacts and mummies from Assyria, Mesopotamia and ancient Egypt. The Gallery of Geographical Maps has an extensive collection of maps from around the world. The popular Sistine Chapel impresses with its magnificent frescoes and frescoes, which Michelangelo painted for 10 years. You can't be in Rome and not visit the Colosseum. This is the largest and most magnificent amphitheater in ancient Rome, the construction of which began in 70 and lasted for ten years. In the past, its arena has been used for reenactments of battles, animal hunting, gladiatorial fights and other spectacles to be enjoyed by all those up to 50,000 spectators it can accommodate. After the Early Middle Ages, the Colosseum often changed its functions, being the seat of a religious order, a fortification, a Christian church and a residential building.
Give the significant to the castle Sant'Angelo. This architectural jewel was built in the time of Emperor Hadrian to serve as a tomb for his family. Like the Colosseum, it served as a fortification, papal residence, prison, and repository of papal treasures. Today, the castle of Sant'Angelo is a museum, and its exhibition is dedicated to paintings, sculptures and antiques. From an architectural point of view, the castle Sant'Angelo is considered an extremely interesting building - its shape is a cylinder placed on a square base.
Who has not heard of one of the most popular fountains in the world - the Trevi Fountain. It is located on a square that is the intersection of three streets. It is extremely rare to be seen without people around him, but the impression he leaves is always stunning. Be sure to pay tribute to the Roman Forum. These remnants of the heart of ancient Rome include temples, arches, the senate, the state archives, basilicas, a rostrum - telling the story of the forum when Rome was in its heyday and the social, political and commercial life of the city developed here.
You should have no doubt that Piazza Navona is one of the most beautiful squares in Rome. Before this place became a square, there was a stadium where people watched matches and competitions. Today, there are three beautiful fountains in Piazza Navona - the Fontana dei Quattro Fiumi, the Fountain of Neptune and the Fontana del Moro. The Spanish Steps - 138 steps connecting the Piazza di Spagnaq and the church of Trinita dei Monti. From these steps pour the neighboring streets, where the boutiques of world-famous fashion brands are perched. Sit on them, relax, enjoy the elegantly dressed Italian women, but remember - drinks and food are not allowed.