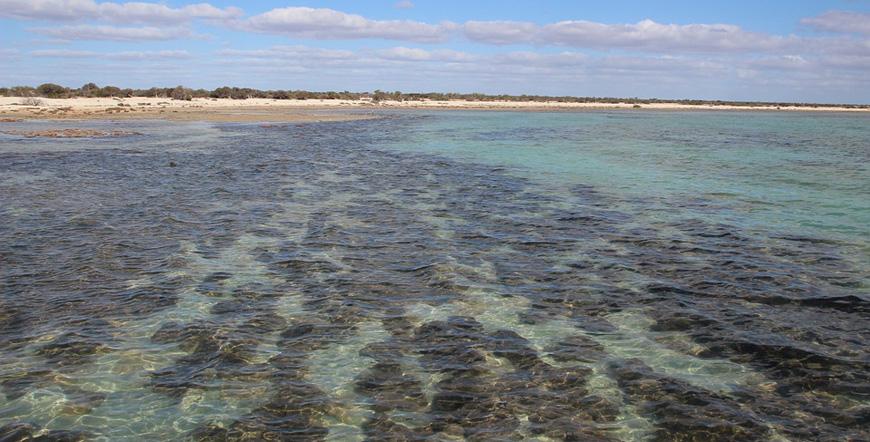 Shark Bay is a unique place. It is located on the shores of Western Australia in a gulf in the Indian Ocean. The region covers 23 thousand sq. m with an average depth of 9 meters and 1500 km of coastline. It has a population of 1000 people spread in different small towns. Its name was given by the English explorer William Dampier in 1699 who notices that the biggest fish in the world, the whale shark gather in the gulf during the April and May full moons. Only Shark Bay and few other places in the world serve as a natural preservation for one of the oldest known form of life on our plant – the stromatolites. They can be easily found and observed here.

The stromatolites can be seen as strange columns and mound formations about 50 centimeters high during low-tide in the heavily saline waters of Hamelin Pool Marine Nature Reserve which is part of Shark Bay Marine Park. Researches shows that without their ancestors who lived 3.5 billion years ago, there would be no form of life on Earth. These various sedimentary formations are created by photosynthetic bacteria which absorbs the carbon dioxide and releases oxygen. Without these bacteria the atmosphere of our plant would not allow aerobic breathing and there would be no ozone layer to protect us from the solar radiation. This region is famous for its diverse marine life and is part of the UNESCO World Heritage Sites since 1991. Shark Bay includes around 30 islands with many preserved territories. Dirk Hartog Island is not only the biggest but also the most historically significant one. It is named after the Dutch Captain Dirk Hartog who discovered the island in 1616 and left an inscribed pewter plate with the date on and the names of the senior crew members. The plate can now be seen in Rijksmuseum in Amsterdam.

One of the important sites in Shark Bay is also the so called Steep Point which is the westernmost point of mainland Australia. The area is a popular fishing destination with over 320 species of fish, however the sharks often steal the fishermen’s catch. Steep Point offers incredible sunsets also known as the ‘final sunsets’ as this is the closest possible mainland place to observe them in Australia. The Francois Peron National Park is also part of Shark Bay as well as Herald Bight peninsula famous as a former pearling camp and a true challenge for the ocean divers. Zuytdorp Cliffs are composed of limestone and stretch at over 300 km of coastline overlooking the bay with their impressive 250 meters of height. The name of cliffs comes from the Dutch ship Zuytdorp which sank here in 1712. This thick limestone called Tamala is used widely for building and landscaping in Austral for its excellent qualities. Monkey Mia is a reserve in the Shark Bay Marine Park. 25 km away from the town of Denham, Monkey Mia (meaning shelter in Aboriginal language) is a favorite spot for the Indo-pacific dolphins that come close to shore to the pleasure of the tourists. It all started in the 60`s when a fisherman and his wife stared feeding the dolphins with their catch on their way back to the shore.

The news spread quickly and feeding the dolphins turned into attraction for the ones who wanted to see them from up close. An infrastructure of roads and parking areas is now available in Monkey Mia and the visitors are given special food to feed the dolphins with. Over 10 thousand dugongs live in Shark Bay who enjoy the green algae available in vast areas and an important food provider for many sea creatures. The dugongs feel very good in the bay having no human activities to destroy their underwater world or to cause fatal incidents with the vessels. These giant sea mammals (used as a prototype of the mermaids) prefer staying away from people. Very rarely they would approach a tourist sailing boat.

The best time to visit Shark Bay is the in the spring and in the fall. This is possible with one of the regular flights from Perth to Denham (800 km) and from there by car to Shark Bay.