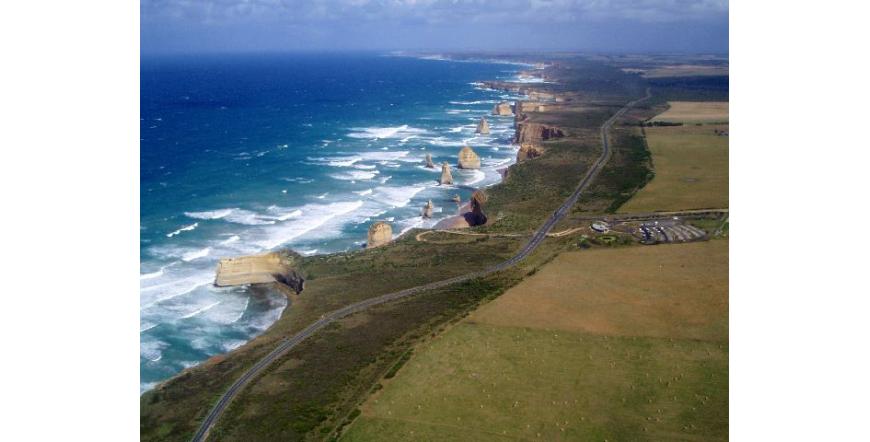 Australia is the only country whose territory comprises an entire continent. It is located between the Indian and the Pacific Ocean, and also occupies the Tasmania Island and many other islands located by the long coastline. The Southern Tropic Circle (the Tropic of the Capricorn) passes almost through the middle of the continent. Australia is the only continent on Earth where there are no active volcanoes and no Ice Age has been.

The larger part of Australia is occupied by sandy and rocky deserts and semideserts. On the East along the Pacific Ocean coastline spreads the Great Dividing Range. The indigenous people of Australia are the Aborigines, who came on the continent more than 40,000 years ago. Their culture is very rich – traditional painting, folklore tales, music and dances. Each tribe has its own territory, determined by the ancestors, its own deities and faith. In administrative aspect Australia is divided into six states и and two territories.

The capital Canberra is located in Eastern Australia. The city was built especially for a capital in 1913-1927 by the design of the American architect Walter Griffin, who had won an international competition. The Canberra Deep Space Communications Complex has gigantic satellite antennae (the largest with diameter of 70 m), which are used to communicate with spacecrafts.

Sidney is the largest city in Australia. The Harbour Bridge and the Opera House in Sidney are the most famous Australian symbols. The bridge has 8 road lanes, 2 railway lines, a pavement and a bicycle alley. The Opera House in Sidney is among the most modern buildings in the world; it was completed in 1973. The concrete roofs remind of huge sails blown by the wind. In Sidney was built a unique sports complex for the Olympic Games in 2000. Sidney is visited by almost 5 mln tourists every year.

One of the natural wonders in Eastern Australia is the Great Barrier Reef, which is located near the Pacific Ocean coastline of the state Queensland. The pictruresque work of nature is built by alive and the skeletons of dead corals. The Great Barrier Reef was declared for protected Great Barrier Reef marine park and UNESCO World Heritage Site. In Queensland are bred more than 1/3 of the cattle in the country, and in New South Wales the number of the sheep is 40 mln. Australia is the biggest exporter of beef and the biggest producer and exporter of high quality Merino wool in the world.

Tasmania is the smallest Australian state. Because of the abundance of apples Tasmania has long been known as the Island of Apples. Only on this island have been preserved the marsupial wolf, the Tasmanian devil and other representatives of the unique Australian fauna. More than 1/5 of Tasmania’s area is protected in national parks, established to protect the picturesque nature.

A large part of Central Australia is a desert. In the southern part of the Northern territory the rocks, sands and the soils are tinted in red hues. That is why the place is called the Great Red Centre. In the Uluru-Kata Tjuta national park is located the biggest monolithic block in the world, called Ayers Rock. The gigantic rock rises at 348 m above the desert, and the circumference at its base is 8 km. Depending on the angle of the sun rays Ayers Rock changes its colour – from pink at sunrise, through orange to dark violet at sunset.

Another national park is Kakadu. It is famous for the Aboriginal settlements and with its exceptionally rich flora and fauna. It is the habitat of 1,200 plant species, hundreds of reptiles, 200 bird species 50 mammal species. In the state of South Australia is located the largest endorheic lake on the continent – Lake Eyre. It is located in a desert endorheic depression – the lowest point on the continent, 16 m below sea level. The vast city of Alice is a tourist centre as it is located closest to Ayers Rock. It is the headquarters of the Royal Flying Doctor Service in Australia.

The state also has great ore deposits – bauxite, nickel, iron ore, and gold. In 70s of 20th c. in the region of the Kimberley plateau were discovered large oil fields and natural gas deposits. Situated in the centre of the Nambung national park north of Perth, the Pinnacle Desert is strewn with thousands of limestone formations, protruding over the yellow quartz sand. Perth is the main industrial centre of the state. The industry developed here includes steel production, ship and car building, food processing, wool and textile industry, etc.

News and events from Australia