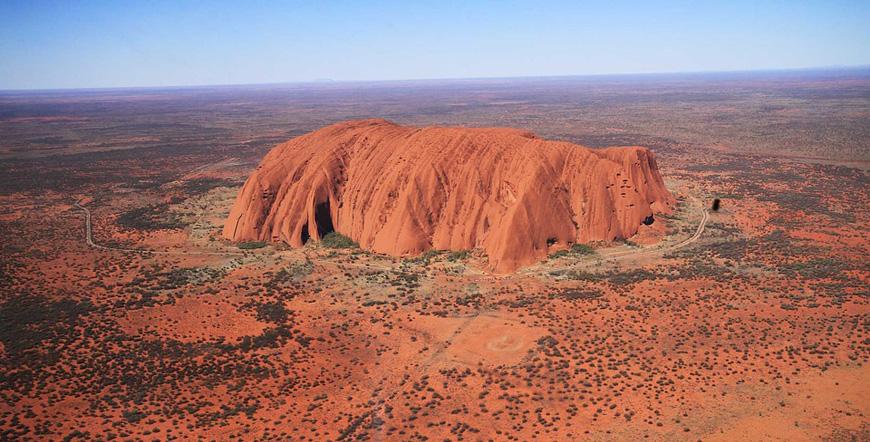 Uluru is a huge red rock rising in the middle of a vast valley in the southern part of the Northern Territory. It is a sacred place for the local Aboriginal people and plays an important role in the folklore traditions of the Anangu tribe. The rock formation is what has remained from an old corroded plateau. This natural phenomena is included in the Uluru-Kata Tjuta National Park together with The Olgas – a group of 36 other big red rocks about 25 km away from Uluru. With its 316 meters height and 9.4 km perimeter the Uluru rock is rightfully known as a miracle and included in the UNESCO World Heritage Site list. Uluru is the aboriginal name of the massive rock. The mighty monolith was visited by a European cartographer in 1873 who named it after the then Chief Secretary of South Australia, Sir Henry Ayers. Thus the rock becomes famous with both names – Uluru and Ayers Rock.

Uluru is one of the most recognizable natural landmarks of Australia. The rock was formed by vertically composed sandstone layers and the ripple marks are still visible to this day. The water soaked into the cracks and dug deep canals that currently turn into waterfall beds during heavy rains. Part of the rainfall pass through the porous rock and appears as spring at the foot of Uluru. These springs provide the much needed water for the local plants and wild animals. The red color of the rock is due to the rusting of its iron particles for thousands of years. This explains the grey color of the later corroded rock. Uluru changes its color over the different parts of the day and the year. It is purple or red at down and sunset and many tourists come to see this impressive view in these hours.

Climbing Uluru rock is not easy and the local Aboriginal people try to ban it entirely for religious reasons. The views from the flat top of Uluru are breathtaking. The local guides offer the visitors tours around the rock and give them information about the animals and the plants in the area as well as the culture and the history of the indigenous population. According to the legend, there is a huge space with a power source under the rock. The Aboriginal people call that power source Tjukurpa or 'Dreamtime' and believe that people are in a state of a dream while walking around Uluru. The Aboriginal people have left their history in the form of paintings on the top layer of the monolith. There are paintings found in some of the caves from dozen thousands of years ago.

Visiting this natural wonder is possible all year round yet it must be noted that June and July are pretty cold, November and December are very hot and thunderstorms often occur during the January-March period. The closest town to Uluru is Alice Springs which is 335 km away. However, when one decide to visit this amazing part of central Australia the distance doesn’t matter.