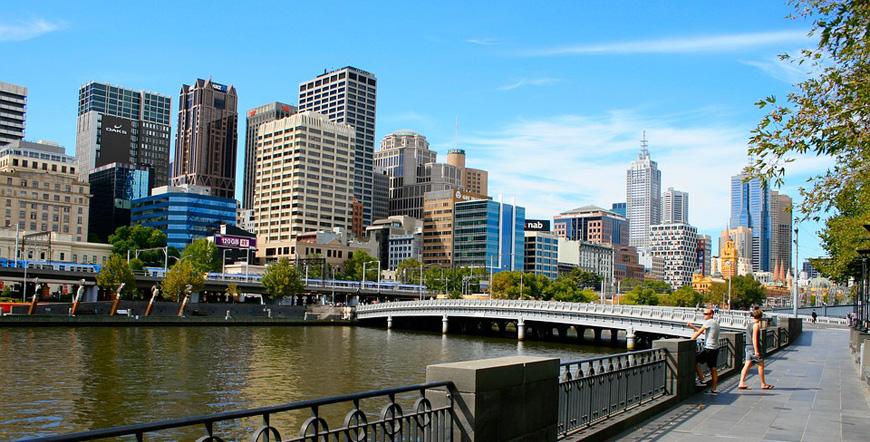 Melbourne is the biggest city in Victoria State and the second largest city in Australia after Sydney. It was built as a small agricultural penal settlement in 1835. It started to grow as a result of the gold fever during the 50`s of 19th century. The city keeps expanding to this day and has become one of the most important urban areas of Australia. The entire metropolitan area’s population is about 3.9 million people. Melbourne was the capital city of Australia for the period 1901-1927 before Canberra.

There are many historical buildings in Melbourne like the Melbourne Town Hall with its Victorian Style, the Windsor Hotel and the Flinders Street Railway Station. They coexist with the new skyscrapers and the Central Business District (CBD). Analogically, the public transport maintains and uses its old trams together with the modern ones.

Melbourne has many parks and its often referred as the Australia’s garden city. Carlton Gardens are truly astonishing and one of the World Heritage Sites enlisted as such in 2004. The importance of the gardens are defined by the impressive Royal Exhibition Building build for the exhibitions held there in 1880 and 1888. The Melbourne Zoo is located in the Royal Park. The Melbourne Cricket Ground (located in Yara Park) is hosting the annual exhibition cricket match. There are a lot of grapevines and dense rain forest along the Yara River valley.

The National Gallery of Victoria houses the largest paintings collection in Australia. The Arts Centre Melbourne includes Hamer Hall (one of Australia’s largest concert venues), the State Theatre and the Melbourne Symphony Orchestra. One of the exciting attractions of Melbourne are the horse races held the Flemington Racecourse. Phillip Island located south from Melbourne is a poplar day trip destination. Its famous as a home for major motorcycle events on one hand and the largest Little Penguin colony in the world on the other.

Another interesting fact about Melbourne is that it’s the home town of the notorious bushranger Ned Kelly.

Melbourne is an exceptional cosmopolitan city offering high standard of living. It has been rightfully chosen as the best city to live in in 2002, 2003 and 2011.

Tags Melbourne is an exceptional cosmopolitan city offering high standard of living. It has been rightful |  2003 and 2011. |
Vote:
Rating 5 from 1 voted Melbourne