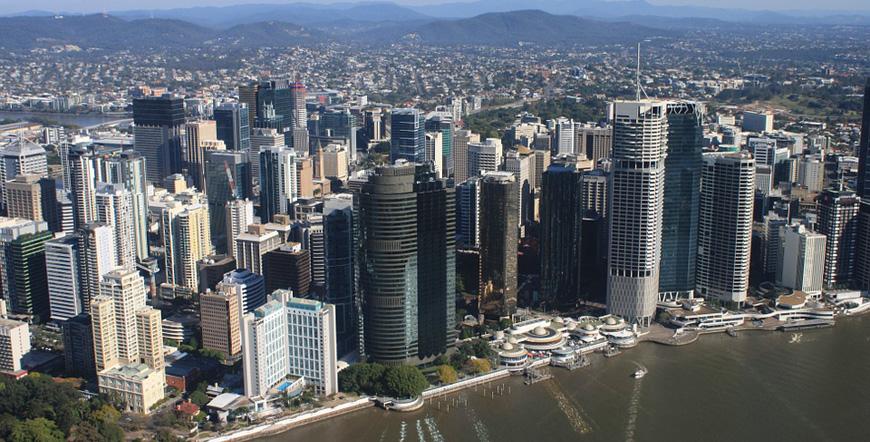 Brisbane is a city in Australia with a population of around 2.5 million people within the city and 3 more millions in the surrounding area. It was formed back in 1924 as a penal settlement and becomes the capital of Queensland State in 1859. The city starts growing after World War II when people from the southern Australian states moved to Brisbane because of its more temperate climate and its proximity to the sunny towns of Gold Coast and Sunshine Coast. Besides them, plenty of little islands perfect for surfing and yachting are situated in the Moreton Bay near Brisbane. Moreton Island is visited mostly for wild dolphin feeding experience available in the Tangalooma Resort.

Brisbane is nestled in the southeastern corner of the Queensland State and had developed mainly around the Brisbane River. The central part of the city is located on the river curve where most of the city skyscrapers have been built. Garden and parks take a significant place in Brisbane. The best way to move around and see the city is using the well-organized ferry transport which allows you to get on and off many different locations. The City Botanic Gardens of Brisbane are situated on a peninsula on the southern bank of Brisbane River. They have been created in 1855 and one can see a significant number of rare trees, shrubs and flowers. The species variety of the gardens is due to the work of Walter Hill who was the appointed curator upon its development. A beautiful fountain named after him was built in his honor in the Botanic Gardens in 2020.

Another park called South Bank can be found in the southern part of Brisbane. It attracts the locals and their families with the 60-meter tall Wheel of Brisbane, its numerous shops, restaurants and cinemas. A remarkable landmark of the park is the Nepalese Peace Pagoda left after the World Exhibition held in Brisbane in 1988. It is the sole handmade pavilion still admired by the visitors of the park. The building is made of wood from the Terai jungle forest in Nepal. The raw material was first transported to Kathmandu where 160 Nepalese families worked on creating the different elements of the pagoda for two years. The assembling itself was done on site at the Expo in Brisbane. There are three floors where the second one is a beautiful tea house. After the World Expo ended this masterpiece was moved to the South Bank Park, as the citizens of Brisbane insisted it stays with them. The Queensland Maritime Museum also located in this park includes an exhibition hall, library, a lighthouse and few ship-museums. The artificial beach offers a swimming pool and a list of entertainments.

West of the Brisbane city center there is another botanic garden. It is located at the foot of Brisbane's tallest mountain, Mount Coot-tha. It includes designated areas for a Japanese Garden, Bonsai Garden, Fern Garden, Exotic Rain Forrest Garden and many other rare plants. The park is a popular spot for family weekends and it offers breathtaking views to the city and the Pacific Ocean. The park is also a home of the Sir Thomas Brisbane Planetarium who was the first governor of the newly built city as well as a famous astronomer. Curious fact about this park is that the entry is free but no dogs are allowed on its premises. The Queensland Cultural Centre located in South Bank as well, includes an Arts Center, the Queensland Museum, the State Library of Queensland, the Queensland Art Gallery offering exceptional Picasso paintings and the Gallery of Modern Art. The subtropical gardens and cafeterias surrounding the Cultural Centre contribute to the wonderful time the visitors can spend here. The astonishing rocks of Kangaroo Point Cliffs are located next to the former South Brisbane Dry Dock. The rocks formed over millions of years however their shape nowadays is a results of the quarried stone used by the convicts for the construction of the city. Kangaroo Point Cliffs are popular challenge among the climbing society. The historical buildings in Brisbane are few but quite interesting and can be seen while waking in the central area. The Brisbane City Hall was the tallest building when it was built in 1930. Its Clock Tower is still one of the emblems of the city rising at 91 meters above ground level having clock faces that are 4.8 meters in diameter. Besides that the clock includes Westminster Chimes that can be heard every quarter of the hour even in the most remote suburbs of Brisbane. There is also a Concert Hall in the building used for concerts and other events. The Brisbane Museum is located on the top floor of the City Hall and organized tours of the building and the Clock Tower are available.

The Old Windmill, located in the central part of the Observatory Park, is one of the oldest architectural heritages in Brisbane. It was made by stone and built by convict labor in the beginning of 19th century. The Mill was used to process crops and for signaling. It stands as a reminder of the convicts past who have spent hours on the treadmill to process the grain. The Cathedral of St Stephen in Brisbane is another historical building in the city. It is a Roman Catholic Church erected in the beginning of 19th century after the request of the first bishop of Brisbane, the Irish James Quinn. The Cathedral has turned into a main Christian pilgrim site. The Customs House is also a remarkable building with its copper-sheathed dome. Another signature site of Brisbane is one of the longest steel cantilever bridge in Australia. It is designed by John Bradfield and spans over Brisbane River connecting the northern and the southern parts of the city. It has three traffic lanes: one for motor vehicles, one for bicycles and one for pedestrians. It is named after one of the prominent Queensland’s governors John Douglas Story. The Lone Pine Koala Sanctuary is one of the biggest koala habitats in Australia and among the most protected areas in the world. The Lone Pine Koala Sanctuary became popular during the World War II when it was visited by Americans invited by colonel McCarty’s wife to meet the wild life of Australia. Today the visitors of the koala sanctuary can hold and feed the koalas. There is a sheep farm on the territory of the sanctuary as well where the visitors can see demonstrations by the shepherds with their dogs and the sheep herds. The tourists can buy souvenirs at the sanctuary shop and enjoy a cup of coffee or a glass of wine at the cafeteria and the restaurant available onsite.

Cricket is the popular sport in Brisbane and its thrilling to see a game at The Gabba Stadium built in 1895 and with a capacity of 42,000 seats. Brisbane is popular with its markets too. Handcrafted goods and tailor made clothing can be found at The Collective Markets in Stanley Street Plaza, in the shops of the impressive building Brisbane Arcade and the Sunday markets in Eagle Street.

Brisbane is a charming and slow-paced city and its citizens are part of this atmosphere. Besides working they find time for romantic rooftop breakfasts where the bars offer Australian style brunch. The lobsters from Moreton Bay are traditional for the Brisbane cuisine. The one-day trips to the Gold coast for its shops, restaurants and wonderful beaches are another leisure routine for the Brisbane locals. Other tourist destinations near Brisbane are Bribie Island suitable for surfing, the seaside town of Rainbow Beach with its colorful sand dunes, the Kondalilla National Park with its marvelous waterfalls and many others.

Visit Brisbane in the spring or in the fall as the summer is too hot and the winters are cold.