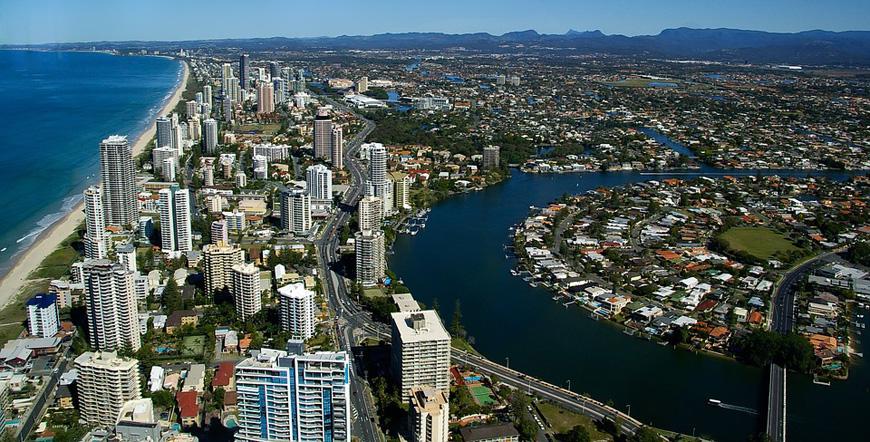 Gold Coast is a unique Australian city located along the 70-kilometer coastline of Queensland State. It is a relatively new city, proclaimed as one in 1959 and its name speaks for itself with the sunny subtropical climate, the great surfing conditions, theme parks and diverse night life and entertainment options. Gold Coast has a population of 700,000 people and is located in Southeast Queensland, 60 km away from the state capital Brisbane. Gold Coast is one of the fastest developing city in Australian and the most popular tourism destination in the state.

The first European to arrive here in 1770 is Lieutenant James Cook and only a hundred years after that the small settlement grows quickly attracting more people with the valuable red cedar wood material used for furniture business on one hand and the superb coastline for developing the tourism business on the other. Half of the Gold Coast region is cover by woods turned into parks by the entrepreneurs and the swamps have become picturesque canals with residential buildings and hotels around them.

One of the first suburbs of Gold Coast is Surfers Paradise. It hosts the tallest buildings Q1, constructed by glass and aluminum which has turned into an icon of Queensland. It is 322.5 meters tall including the spire (around 50 meters itself). The observation deck located on the 77th floor is at 230 meters above sea level and it’s the only deck in Australia with a capacity of 400 people. It takes 13 second to reach the observation deck with the high-speed elevator. The 360-degree views towards Brisbane, New South Wales and the Pacific Ocean are simply stunning.

The lighthouse located in the south end of Gold Coast is also known as Captain Cook Memorial as it is supposed to be the place where Captain James Cook has docked his ship. The nearby monumental tower surrounded by memorial stones honors the casualties of the sunken by the Japanese army hospital ship Centaur back in World War II. For the art lovers the HOTA, Home of the Arts gallery of Gold Coast offers art collections shown both indoor and outdoor. Permanent and visiting art exhibitions and various concerts can be seen at the Gold Coast Convention and Exhibition Centre.

Chinatown takes a main part in the central business area of the city. The statue of Confucius is an important landmark of Chinatown. One of the entrances of the neighborhood is emblematic with the two towers built in the style of one of the most successful Chinese dynasties – the Chen dynasty. The numerous lanterns and their bright red, yellow, blue and green colors symbolizing prosperity, happiness, harmony and rich harvest provide even further for charismatic atmosphere of Chinatown. Chinatown parks are very green and the markets are unique.

The most popular places of Gold Coast however are the wonderful beaches and theme park, attracting millions of tourists from all over the worlds. To name a few, Palm Beach is considered the cleanest beach in Queensland and Duranbah beach is a key surf destination. Big surf events and body board competitions are organized here. The waves are 1.3 meters tall on average and reach 6 meters during the tides.

North Stradbroke Island is another destination with serene dune beaches, options for ocean fishing and has unique flora and fauna. It is the home of kangaroos so used to the people that often join the camping tourists. Breathtaking views of Humpback whales with their unusual dorsal finds and knobble heads can be enjoyed on the island as well.

One of the most visited theme parks in Gold Coast is the Sea World Marine Park dedicated to sea mammals with well-maintained Oceanarium. Some of the most interesting attractions would be the Storm Coaster roller-coaster reaching 70km/h on extremely narrow and curvy tracks. There is a riff with over 80 water canyons, springs and numerous animal sculptures. The park organizes a dolphin show in a huge pool, extreme water-ski shows, Antarctic penguin exhibition and the only exhibit of Polar Bears in Australian arranged in three levels. The Shark Bay Discovery is another challenging attraction in the park where the visitors can observe the swimming sharks from special underwater acrylic cages.

Dreamworld is another theme park, the biggest in Austrialia, with over 40 rides and other attractions including a roller-coaster, zoo, special kids section, the newest motorbike rollercoaster and many other extreme and fun experiences. The Wet'n'Wild Gold Coast theme park is mostly movie oriented, it has water attractions, rides and many shops and dining places.

The Warner Brothers theme park is almost entirely dedicated to the Aussie movies and movie characters who walk around the park and the visitors can takes photos with them. It provides memorable 4D movie experience and many others.

For those who are most interested in the wilderness of Gold Coast, the best place to visit would be the Lamington National Park part of the UNESCO World Heritage Sites. It includes tropical forests, diverse bird species, over 500 waterfall among which the cascade Morans Falls, many hiking trails and magical mountain views to name a few of the great natural sights the visitors can enjoy.