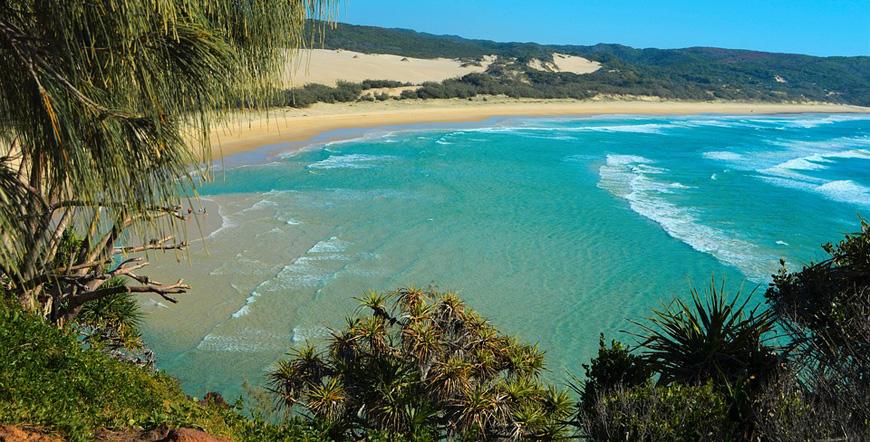 Fraser Island lays on 123 km along the coast of Queensland.  It is unique for its high dunes reaching 240 meters in height at places. Fraser Island is an UNESCO World Heritage site and it is one Australia’s prides. It looks as if it is covered with dense dark green forest when observed from Queensland mainland. However, it is the biggest sand island in the world (120 km long, 20 km wide) and it contains more sand than Sahara Desert. The population in 2016 accounts for only 182 people.

The Butchulla tribe calls the Island K'gari meaning Paradise and has lived in harmony with the island’s nature for thousands of years. Unfortunately, the European settlers destroyed what the Aboriginal people have had for so long very quickly. They cut vast areas of the forest for its high quality wood material. Finally, in 1991 Fraser Island becomes part of the K'gari (Fraser Island) Recreation Area, Great Sandy National Park and thus the survival of its nature is secured. The island carries its European name after Captain James Fraser and his wife Elisa Fraser, who were washed up on its northeast shore after the sinking of Stirling Castle ship. Captain James Fraser died and his wife was saved by the Aboriginal people.

During the spring and the summer the plain meadows of the valleys of Fraser Island are covered with flowers. The inland is covered with tropical rain forests that generate enough water for the numerous fresh water lakes and crystal clear springs. Dugongs (a sea mammal species) and turtles can be seen in the swampy waters of Great Sandy Strait; over 1500 humpback whales pass through Hervey Bay during their migration. The Wabby and McKenzie lakes inside the island are very beautiful. If you drive along the east coast of Fraser Island you will enjoy the 25-kilomer red sandstone chain – Cathedrals. Not far from this point is located Indian Head cape which is a perfect spot for whale-, dolpin- and skark-watching.

The local fauna is represented by the pure blooded dingoes who have become tragically famous for their aggression these days. The visitors are strictly prohibited from feeding them in order to avoid any accidents with fatal consequences. The other animal species on Fraser Island include the loggerhead sea turtle (Caretta caretta), stingrays, possums, bats, sugar gliders, wallabies, echidnas and some reptiles. Besides all of the above, Fraser Island is a home of over 200 bird species. The most remarkable ones are the loud sulphur-crested cockatoo living in the forests and the colorful coconut lorikeet.

Fraser Island provides good conditions for the visitors year round, however the whale-watching is only possible from August until October and preregistration is needed. Reaching the island can be done by plane from Brisbane to the city of Hervey and from there 15 km on a boat to the island.

Fraser Island can be fully explored on foot but only with some of the guided tours.