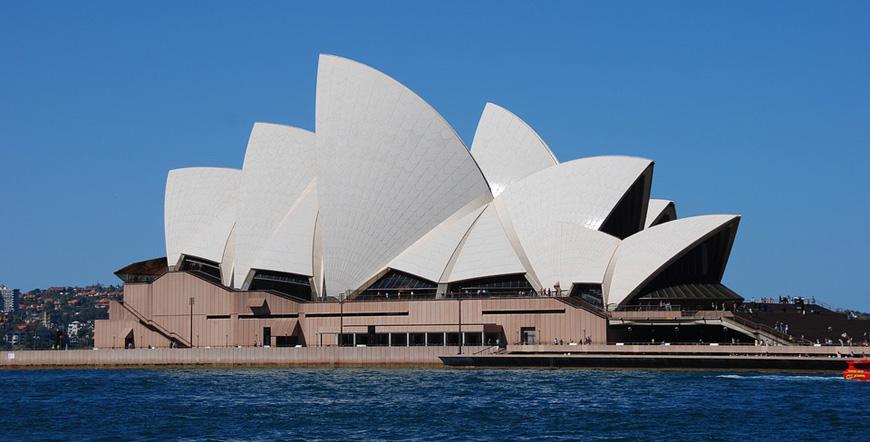 Sydney Opera House is one of the most popular and recognizable buildings of 20th century. The ship-shaped design of the building looks like as if it’s ready to sail off to the Pacific Ocean passing by another emblematic Sydney site – the Harbour Bridge. The Opera House and its surroundings occupy the harbor area between Sydney Cove and Farm Cove and its right next to the Central Business District (CBD) and the Royal Botanic Garden.

The construction of the Sydney Opera House is mostly due to the work of one of the directors of the Sydney Conservatorium of Music named Goossens who insisted to the New South Wales government for the need of building a suitable concert hall for such big and beautiful city as Sydney. He in fact even proposed the location Bennelong Point which has great view to the Sydney Harbour and interesting history. Bennelong was a small rocky island and a home of an Aboriginal person with that name who was telling stories about the culture of this place for a long time. Many years later with the support of Joseph Cahill, a New South West prime-minister at that time, an international design competition was announced in 1957. There are 233 projects from 32 countries and the winner is the Dutch architect Jørn Utzon. He moves to Sydney in 1963 to control the creation of his famous project.

The construction works began in 1958 and goes in three phases: building the platform, building the outer shells and creating the interior design. During the building process it became clear that both the designated time and budget will not be enough to meet the scheduled deadlines for finishing this enormous project. For example, the Swedish company needed three years for the exterior tiles of the roof shells to be put in place and provide the effect Utzon wanted – a 122-milimter square with small amount of clay and crushed stone. After the elections in 1965 and change of the government, the critics to the Dutch architect and his project began rising which led to his resignation.

The new team included the architects Hall, Todd and Littlemore who complete the building of the Opera House with total expenses of 102 million dollars (several times over the initial budget) equaling 927 million Australian dollars in 2016. The official opening of the Opera House was made by Queen Elisabeth II on 20th of October 1973 with the Beethoven Symphony No. 9 and huge fireworks. The created of this unique wonder of architecture, Utzon, has not been invited.

The building is distinctive with its modern expressionist design and has a number of fitting concrete shells, each made of spherical plates with radius of 75.2 meters to form the roof. It covers an area of 1.8 hectares with length of 183 meters and width of 120 meters. The building is carried by 588 concrete pillars going as deep as 25 meters under sea level. The highest point of the building stands at 67 meters above sea level needed for a 22-story constriction. The roof is made of 219 premade concrete sections each weighing 15 tons. These sections are covered with1 million tiles in two colors: flashing white and matt white. The exterior of the building is made of pink Tarana Granite.

The interior design include panels of Australian white birch from Wachope area in the northern part of New South Wales. The indoor ambience is a fine example of fantasy, luxury and beauty. The larges spaces are two – the Concert Hall with 2679 seats and the biggest organ in the world with over 10 thousand pipes and Joan Sutherland Theatre with 1507 seats named after the famous opera singer. There are several smaller concert halls as well as a huge ceremonial stairway where concerts are also performed. The Sydney Opera House hosts over 1500 events annually and is visited by over 1.2 million people besides the 350 thousand people who only do the tourists tours.

Some of the most significant shows presented on the scene of the Opera House right after its opening are ‘War and Peace’ by Sergei Prokofiev, ‘Fall of the House Usher’ by Larry Sitsky, Wagner music concert performed by the Sydney Symphony Orchestra, Joan Sutherland performance, the speech of Pope John Paul II in 1987 during his visit to Australia and many others. An interesting part of the newer Opera House history is Samantha Riley’s climb with the Olympic Torch to the roof of the Concert Hall before as its last point before the opening of the Sydney 2000 Olympic Games. The Sydney Opera House has also been a scene for many Disney movies and super heroes.

Bunnelong restaurant is located in the western part of The Monumental Steps and its glass walls allow its guests to enjoy the entire view over the harbour. The Sydney Opera House has become part of the UNESCO Word Heritage list in 2007 for its remarkable architecture. Utzon also received the Pritzker Architecture Prize in 2003 and the announcement made by Thomas J Pritzker rightfully says: ‘Jørn Utzon has designed a remarkably beautiful building in Australia that has become a national symbol to the rest of the world.’