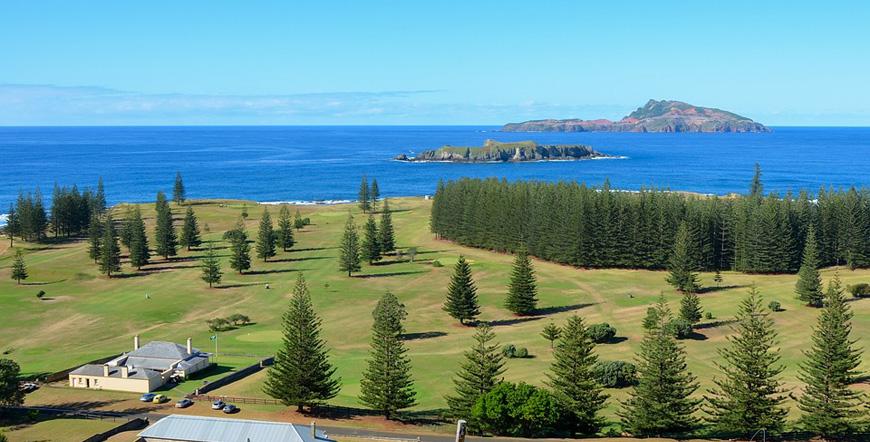 Norfolk Island is only 8 km long and it’s one of the most charming places a man would dream to see. It is located in the southern part of the Pacific Ocean, hundreds of kilometers away from the New Zealand and Australia’s mainland, Norfolk Island has kept its unique flora including the local species of pine trees and the dense subtropical rainforest with giant tree ferns. Norfolk Island territory of 9 thousand acres includes the nearby Philip Island and Napean Island. The population is 1800 people and the capital city is Kingston. The most precious part of the island is its necklace of colorful coral riffs with a lot of shiny small fish.

James Cook is the first European to set a foot on the miniature island on 10th of Oct 1774 and named it after Mary Howard, Duchess of Norfolk. She was an exceptionally elegant royal lady and asked the captain to name some of the islands he explore after her. Mooring on this magical place, James Cook easily decided that it’s the best fit for the charming lady although she has already been deceased at the time of his discovery. James Cook is fascinated by the beauty of the island, however he also appreciates the giant pine trees and the flax plants both ideal for ship building and repair. 14 years after this, the island becomes an exile location and a penal settlement is built winning the island the reputation of ‘the hell of the Pacific’. Later on, in 1856, the descents of the Bounty ship rivals and their Tahitian wives and children sail for five weeks from Pitcairn Islands and settle on Norfolk Island. They bring their specific culture, language and rivalry family names like Adams, Buffet, Christian and McCoy. From these days on, the island have started to turn from hell to heaven on Earth.

The locals have been living out on fishing and agriculture in the past, however the tourism industry is the main source of income for the population nowadays. They are famous for their warm welcome and great tourist service. The visitors are picked at the airport and accommodated in various gracious small houses spread around the island. The next day a free tour around the island is provided. The traditional culture is well preserved in the songs, the dances and the outstanding cuisine displayed best during holidays. One of the main events on the island is Bounty Day celebrated every year on 8th of June. On this day, the descendants of the first settlers gather at the Kingston pier dressed in old-fashioned style in order to recreate the arriving of their ancestors. The ceremony proceeds with a performance of the National anthem and leaving memorial wreaths at Cemetery Bay. The day continues with big lunch prepared by the families for days including banana walnut muffins and mada, pilihi, coco bread, Tahitian fish and corn stakes, sea snail pie and many others. The deserts list is also long – pie from coco, lemons, oranges, passion fruit, chocolate pudding and so on. The evening ball held at Rawson Hall, built by solid Norfolk pine tree, is an event dedicated to peace, goodwill and friendship.

The blue waters around Norfolk are fishermen dream and the nearby coral riffs are also perfect for fishing, besides swimming and scuba diving. Emily Bay is a wonderful beach for relaxing swimming with its calm waters. One third of the Norfolk Island is part of the Norfolk Island National Park and Botanic Gardens where some unique and endangered species can be found. Many hiking and biking trails allow the tourists to reach the giant tree ferns and sink into this green paradise.

There are many gravestones around the island connected to its history and the famous people who lived here. One of them was Lieutenant Philip Gidley King who started the first European settlement on Norfolk Island. Captain Cook Monument installed on the high rocky shore is also known as Captain Cook Lookout and provides for amazing views. Short break in the Queen Victoria's Garden is another great tourist experience. A significant building on the island is the Kingston Penitentiary – a historical convict site.

Norfolk Island is a preferred destination for the wealthy Australian and New Zealand people who buy estates on this fantastic island. There are more than 70 stores offering many shopping opportunities. The official language is English, however the locals also use the Norfuk language which is a mixture of 18th century English and Polynesian.

The best time to visit the island is December-January when the night temperatures are around 12°C and daily temperatures reach not more than 12-21°C. Arriving on the island is possible via a direct flight from Sydney, Brisbane, Newcastle and Oakland, the last one being 1080 km away. This small, remote and hospitable island succeeds in balancing between old and new, paying the due respect to the history of first Pitcairn settlers, the marvelous nature and the tourists all at the same time.