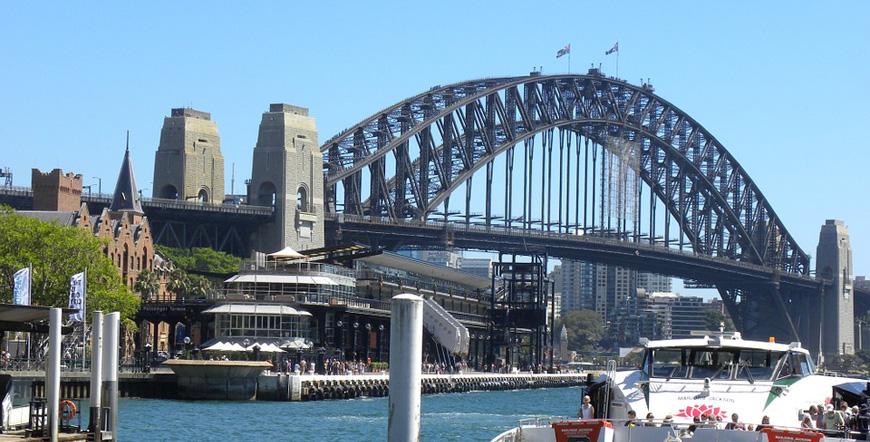 The Sydney Harbour Bridge is one of the most iconic bridges in the world, dominating the sky view and considered a symbol of the city and its harbor. The bridge is an engineering triumph with its unique steel arch. Harbour Bridge connects Sydney central business district and the North Shore. The idea for a bridge between the north and the south shore of Sydney Harbour first came in 1815 from the convict architect at the time Francis Greenway. His suggestion was taken on by the marine architect Robert Bradley who proposed the construction of a pontoon bridge in 1840. Finally in 1924 the bridge was built by the British company Dorman Long under the supervision of John Bradfield. The Sydney Harbour Bridge was completed in 1932 and sends a ‘gallant and majestic modesty’ according to the impression of an American novelist and explorer.

Harbour Bridge has a connecting steel arch which is 503 meters long and 49 meters wide. It rises at 134 meters and can stretch up with 134 mm due to the steel’s reaction to high temperatures during the hot days. The bridge carries seven traffic lines, two rail lines, pedestrian and bicycle alleys all standing at 49 meters above the water. Over 39,999 tons of steel needed for the construction of the bridge were delivered from Middlesbrough, England. Over 1400 workers were busy with the building of Harbour Bridge. The total weight of the bridge is 52,800 tons and it is assembled with 6 million hand-​driven rivets where the biggest one is 3.5 kg of weight and 39.5 cm long. A pair of 89-meter tall concrete pylons faced with granite stand on each end of the arch. The pylons were initially added for esthetic purposes but now serve as tourist attraction. There is an operating museum and tourist center in one of them where the visitors can enjoy a 360-degree view of the Sydney Harbour.

The adrenaline junkies are allowed to climb on the southern side of the arch. The climbers are secured to the bridge with a cable wire an must wear protective gear. Over 1 million people attended the Harbour Bridge opening on March 19th, 1932 and since then the bridge hosted many events including the annual New Year’s celebrations and fireworks. During the huge 2000 millennium celebration the graffito ‘Eternity’ was illuminated on the bridge to honor Arthur Stace who was writing this word for many years on the streets of the city. The bridge was decorated with the Olympic symbols as part of the Olympic flame route during the 2000 Summer Olympics in Sydney.

The Sydney Harbour Bridge celebrated its 75-year anniversary on March 18th, 2007 with 250 thousands spectators. The huge lightshow began at sunset and the public was given LED hats to enhance the effect and provide for an exciting and beautiful experience. The steel construction of the bridge requires regular maintenance and painting where 30 thousand liters of paint are used. The words of the New South Wales governor are always valid for Harbour Bridge: ‘It will never be old-fashioned, it will never grow old; each part of its time has become part of all times’.