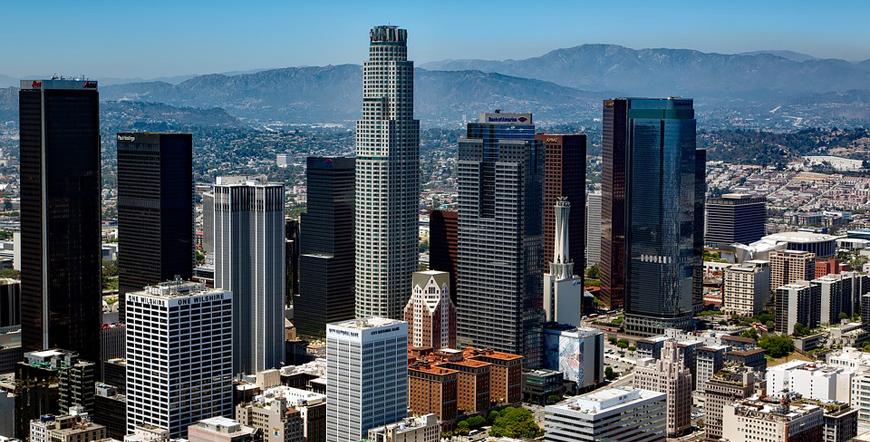 The Americans often say “Only in LA!”. Life in Los Angeles is eccentric, dynamic and unique. There are few cities in the world that have such a memorable impact. The city stretches on an area of 467 square miles (around 750 square meters). When you add the surrounding 5 counties, the territory grows to over 54 000 square miles.

1. LA Downtown is the heart of Los Angeles and the landmarks are many. Angels Flight Railway is the shortest funicular railway in the worls. It was built at the beginning of the century and then did not work for 30 years, it was reopened in 1996. Through the 100 meters funicular railway you can go from Hill Street to the full of fountains Water court in 70 seconds. An interesting part is the sculpture of a woman, called Source Figure. The source comes under her legs and she is standing with her hands open, as if offering water to the city.

In the California Science Center in LA you can see the 17-meter “star” of the Biology sector. The “star” moves with the help of animatronics and demonstrates how the harmony is achieved in the different parts of the human body.

In the LA Chinatown it seems like the tourist has been moved to South Eastern Asia. The Japanese Garden is an oasis on the roof of the New Otani Hotel. It is a copy of a 400 year-old garden in Tokyo.

In the Children's Museum kids can record a song, organize a TV show, paint or build a city from pillows.

There are over 3,5 million exhibits in the galleries and halls of the Natural History Museum. Regal Biltmore Hotel was built in 1923 and is a masterpiece of fine arts. The lobby immerses you in a Spanish palace atmosphere, the indoor pool looks like a Roman bath and the beautiful bar is a sophisticated venue for an afternoon cocktail.

The Old Firehouse was built in 1884. Inside you can find fire-fighting equipment and photos from the 19th century.

The Westin Bonaventure Hotel has an interesting architecture. The five cylinders, wrapped in glass, rise in a slight slope in the sky. The only elevator, intended for visitors, passes through the lobby ceiling, goes into the open air and reaches the rotating bar on the 35th floor.

2. Hollywood is the world capital of showbusiness. It feeds our imagination with glamorous visions of romance, splendor and adventures.

Griffith Park is the local citizens' green sanctuary. It covers an area of 4100 acres. It is named after Griffith J. Griffith, an industriallist who in 1896 donated 3000 acres of land to the city for building a park. Later on the park added to its territory from donations and land purchased by the city authorities. The trees and rocks inside appear in many TV shows and film productions, such as Invasion of the Body Snatchers, Batman, Jurassic Park.

In the LA museums of entertainment industry you can follow the development of Hollywood – from the technically poor era of mute cinema to the contemporary world of perfect techniques and special effects. There is a miniature model with the smallest details of Holliwood from 1936.

On 1.5 km along Hollywood blvd. sidewalk you can see gark gray granite plates with pink stars embedded inside. In the middle of these stars there are brass plates with the names of Hollywood “legends”. This alley is known as the “Hollywood Walk of Fame”.

In the Chinese Theater you can see the famous hand and footprints of Holliwood stars. So far there are 160.

3. Wilshire Boulevard is a cultural monument on its own. It goes from central LA towards the sea for 25 km.

The section on Wilshire Blvd. in LA, known as Museum Row, has not only the six completely different in thematics museums, but is also proud to feature the prehistorical tar pits. Around 40 000 years ago oil deposits have made their way to the Earth surface, they united in shallow lakes and then thickened in sticky asphalt. Many mammals found they death here: coming close to the lake to drink water, the animals were sinking into the tar and could not make their way out. The sticky substance here contains over 600 types of fossils from birds, mammals, plants, reptiles and insects from the Ice Age.

The Farmers Market is the most picturesque marketplace in LA. The initial concept of two entrepreneurs was to build a market where the farmers could sell their produce.

The construction of this open market began in 1934. Later on the Blanche Magee restaurant was built; it continues to work today. Today the market is made of around 100 stalls and more than 20 restaurants.

4. Beverly Hills - “the dream neighborhood”. Here you can find the famous designers Tiffany, Fendi, Gucci and Cartier. The extremely expensive real estates, the legendary hotels, the overluxurious restaurants and of course the movie stars.

Here you can also find the famous hotel from the movie Pretty Woman. It was open in 1928. Virginia Robinson Gardens is the oldest estate in Beverly Hills. The rich heir Harry Robinson and his wife Virginia left it to Los Angeles.

5. Westside – the Western part of LA. Getty Center is a town located on the hill over the Brentwood villa area. It was designed to house the richest music collection in the world and the institutes serving the museum – research, restoration and charity. It was a gift from the billionaire Paul Getty. The five pavilions at the museum are connected with alleys. From the garden and the squares you can see the whole city. In the pavilions you can see the permanent collections of European canvases, paintings, sculptures, manuscripts and applied art, American and European photography. Here you can see the famous collection of French furniture and decorations that include the “Regency Age” salon from 1710 and the Neoclassical salon from 1788.

In the Museum of Tolerance the halls are equipped with the newest interactive technologies. Documentary films from the deportation of Jews are screened in one of the halls, where the visitors can also see reproduction scenes from the “death camps”. Each visitor is provided with a “passport” bearing the name of a child whose life has been dramatically changed due to the Nazi dictatorship and World War II. Later on the visitor finds more about the child's destiny.

University of California, Los Angeles(UCLA). This is a university complex where you can see the library, the garden with more than 70 scupltures by artists like Henry Moore and Gaston Lachaise, the botanical garden that features around 5000 types of plants from the whole world on an area of 7 acres. There are also temporary exhibitions of the different world cultures and visual arts.

6. Santa Monica, Venice and Malibu – the three coastal cities embrace Santa Monica Bay as an arc. Santa Monica is a tidy city with an area of 15 sq.km. and colorful population of artists and writers, resettlers – Englishmen, celebrities, professors and retired people.

The Santa Monica Pier, built in 1906 is the most significat landmark in the city. Driving a car on one of the busiest streets in Santa Monica is forbidden. The bushes, with fountains behind them, are cut in the shape of dinosaurs.

The newest attraction in the city is a small, ocean-going aquarium, where you can see ocean fauna inhabitants brought in by the tide.

Venice is a wrongly created fantasy. A rich businessman from Los Angeles imagined Venice as a romantic copy of the Italian Venice. He made long canals, dropped gondolas in them and even built small copies of the Doge's Palace and other Venetian landmarks. He had technical problems and that's why his dream remained unfulfilled. Today only three canals with bridges are kept. To the north of Santa Monica is Malibu. The beurtiful nature, a combination between the coast line and the mountain slopes, has seduced countless number of TV and movie stars to build their ultramodern houses on the beach.

7. Most of the big film and TV studios are located in the San Fernando valley. A few restaurants have also opened doors recently.

Visitors are not allowed in the Disney Animation Studio. The building's architecture is amazing. It is made of glass, the shape resembles a huge ocean liner and there are little Mickey Mouses mounted on the walls.

The Mission San Fernando was founded in 1797 and is named after the Spanish king Ferdinand III. Through the years the buildings have been destryed and the owners have changed. In 1923 the building has been restored and now the tourists can see places known from the movies that have been shot here.

The NBC studio complex can be viewed by visitors. The visit at Universal combines a tour of the world's largest cinema and TV production complex and the most modern amusement park.

Disneyland is the most entertaining place in the world. Among the attractions are the rides, the haunted mansions and others. “Jurassic Park” is an exciting water adventure in the world of dinosaurs, and “Terminator 2” is the best 3D attraction created so far.

8. Pasadena is a separate city that has its own distinct sofphisticated taste. The flour mill was built in 1816 and is one of the few preserved examples of the Spanish colonial architecture in Southern California. The famous complex Huntington Library, Art Collections and Botanical Gardens is located in San Marino. At the beginning of the 20th century the railroad magnate Henry Huntington built a house, which is now turned into one of the most prominent cultural complexes in the world. The library contains 600 000 volumes and around 300 manuscripts. In the gallery the visitor can see the world known collection of British paintings.

Huntington Gardens is a fantastic garden with an area of 150 acres. It includes the Desert Garden where the visitor can see the world's largest collection of desert plants, organized by continents. There is also a Japanese Garden and a Rose Garden that occupies and area of 3 acres. Here you can find also a Herb Garden, a Palm Garden, a Jungle Garden and a Shakespeare Garden where you can find the plants mentioned in the great writer's works.

The old town in Pasadena has been given well deserved attention. On its West is the Colorado Street Bridge. Its spectacular arches were built in 1913. On January 1st every year crouds of spectators gather to watch the Rose Parade.

There is another spectacular garden with around 1500 types of blossoming roses in it. In 1914 the billionaire William Wrigley bought a house where the Tournament of Roses Association is now located.

9. Long Beach, San Pedro, Palos Verdes are separate parts of the LA city. With their unique individuality they make LA even more interesting.

“The Aquarium” is one of Long Beach's landmarks. Above the entrance hall you can see a real size model of the world's largest creature – the blue whale. There are 17 huge and 30 smaller aquariums with around 10 000 representatives of the Pacific Ocean fauna.

Naples is a city, composed of three islands in the artificially created Alamitos Bay. The creation of these canals was an idea of Arthur Parsons who learned a lesson from the mistakes he made in Venice and made the canals with a slope so that they can be kept clean from the tidal waves.

The visitor should definitely see the huge passenger ship Queen Mary, anchored forever at the Long Beach port. This splendid pearl was serviced by a crew of 1100 people and could take 1900 passengers. Today the first class cabins are turned into a hotel and the walk around the whole ship could take half a day.

South Coast Botanic Garden is a botanical garden with a strange destiny. It was made on top a place that was a landfill until 1960. Today the visitor can enjoy the planted flowers, herbs and rare cacti.