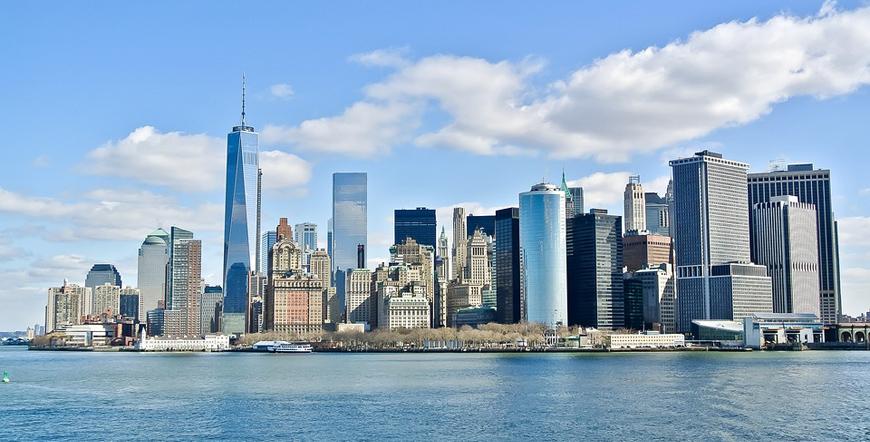 New York is a city located in the state of New York, with a population of more than 25 million people. The city that never sleeps has one of the largest harbors in the world, and its five boroughs – Brooklyn, The Bronx, Manhattan, Queens and Staten Island and its suburbs represent one of the biggest urban agglomerations in the world. This huge, noisy, constantly working city has many attractions, entertainments, museums, restaurants and night clubs – the visitors need a lot of time to be able to submerge in this amazing city's atmosphere.

The Europeans first set foot here in 1524, and in 1614 the Dutch established here New Amsterdam. The city was renamed New York by the British 30 years later, after King Charles II of England granted these lands to his brother, the Duke of York. New York was the USA capital from the declaration of independence in 1785 until 1790. New York turned into a developing city that attracted millions of immigrants, coming by ships at the end of the 19th and the beginning of the 20th century. They were being greeted by the Statue of Liberty, which is a world known symbol of USA and the democracy. The visitors can learn about all these people who came here to look for their happiness at the Ellis Island Immigration Museum.

New York's landmarks are diverse. Among the most emblematic are: Empire State Building – one of the tallest skyscrapers in the world; Times Square – the district with the Broadway theaters; Wall Street – the leading world financial center, created in 1792; The Statue of Liberty; United Nations Headquarters; St. Patrick's Cathedral; the American Museum of Natural History; Brooklyn Bridge and many others. There are many parks and sport complexes in New York, the most popular one is Central Park in the center of Manhattan. It plays a major role for the relaxation of New York citizens and tourists. The 20km coast line hosts a museum on an aircraft carrier from World War II. Besides Manhattan, which is the most attractive region in New York, the other boroughs also have what to offer to tourists. Coney Island in Brooklyn is an entertainment center with a beach and an amusement park. The Bronx Zoo is famous worldwide. In Queens the tourists can see the 1964 New York World's Fair which marks the beginnig of the space era.

The most significant museums in this huge and amazing city are the Metropolitan Museum of Art, the Museum of Modern Art, The Guggenheim. The largest public libraries are New York Public Library, Brooklyn Public Library and Queens Borough Public Library – they offer a big variety of literature and other materials.

Those who love opera, ballet and theater should definitely visit a performance in one of the halls in Metrpolitan Opera, New York City Ballet or Carnegie Hall.

Some of the most prestigious universities in the world are located in New York – Columbia University, Fordham University, New York University and many others.

For those who love to shop New York offers a large number of stores – from the most luxurious on Fifth Avenue to the more moderate like Macy's.

After the terrorist attacks in the World Trade Center in 2001, the city lost a big part of its tourists, however, little by little, the quick rhythm of this cosmopolitan city attracts them again.

Traveling to New York is serviced by four big airports in the city region – JFK in the Jamaica neighborhood, La Guardia in Flushing, and Newark and Teterboro in New Jersey. The New York metro has 468 stations and is one of the largest metro systems in the world. It works 24 hours a day satisfying the requirements of the citizens and visitors of New York city.