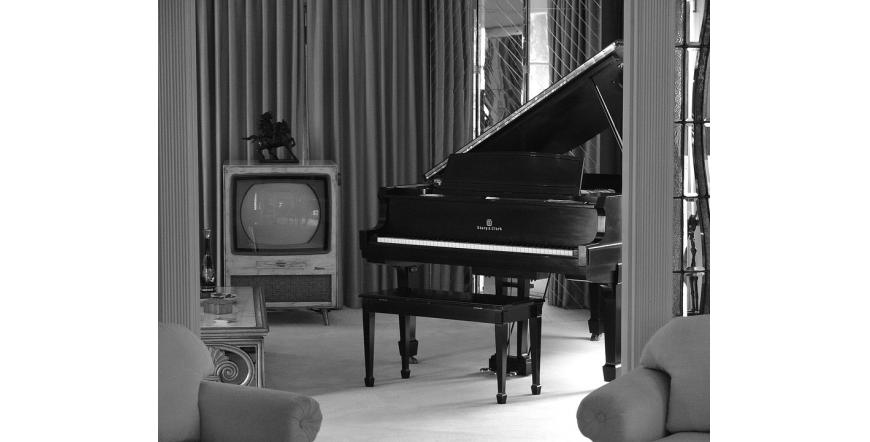 Graceland is the house, in which the rock legend of 20-th century Elvis Presley lived during the best and most fruitful years of his life. It is situated near city of Memphis, state Tennessee. Buying this gorgeous house in 1957, the King of rock realized his dream and the promise, which he gave his dearly loved mother Gladys, who supported him implicitly during the years. The entrance of the house is impressive with the white columns, the elegant balcony and the two lions, which as if protect the beautiful home, surrounded by lots of greenery.

Elvis Presley was born on 8 January 1935 in Tupelo, state Mississippi and was an only child in the family of Vernon and Gladys Presley. Even three year old, the little Elvis made impression by his nice voice. At age of 12 he received his first guitar for 13 dollars as a gift. His star moment began in 1953 when he recorded his first gramophone record, which was dedicated to his mother. During the next several years Elvis Presley sang and recorded the songs, which became hits, and he was a favourite not only of America, but also of the world.

Presley was happy that he lived in the home, which he bought. He overcame difficult his mother’s death in 1958. But while he served his time as a soldier he met his future wife Priscilla, who then was 14 years old. In 1962 Presley brought his beloved Priscilla in Graceland. Their life was a fairytale at the beginning. The rooms in the enormous house are 23. There was space for everything and everyone.

Parallel with the concerts, which he performed, Presley participated also in series of films, approximately 31. In July 1963 he took part in the film „Viva Las Vegas!“, in which a partner of him was Ann-Margret – a singer. The love between the two of them was terrific. But Presley had to make his choice between Priscilla and Ann. Elvis Presley concluded marriage with Priscilla in 1967, and the birth of their daughter Lisa Marie is great happiness for both of them. But the dynamic life and weakness to beautiful women led to dissolution of his marriage with Priscilla. The beautiful fairytale had a tragic end. Elvis Presley passed away in August 1977 in his favourite estate Graceland only at 42. An exceptional singer, person and idol of people from all over the world departed.

Priscilla undertook the management of the estate Graceland after his death. In 1982 the estate Graceland was opened for visitors, and it was also announced for a national memorial by a decree of the Ministry of Interior. The visitors can acquaint with the life of the favoute for generations singer only in the premises on the first floor – the musical room with Presley’s  piano, the kitchen, living room, dining-room, the jungle-room. His cars are preserved, and also the tractor, by which he drove round the lands in the estate of 14 acres.

More than half million visitors per year come here in Graceland in order to pay tribute to Elvis. Namely Graceland is the second most visited private mansion in the USA after the White House.