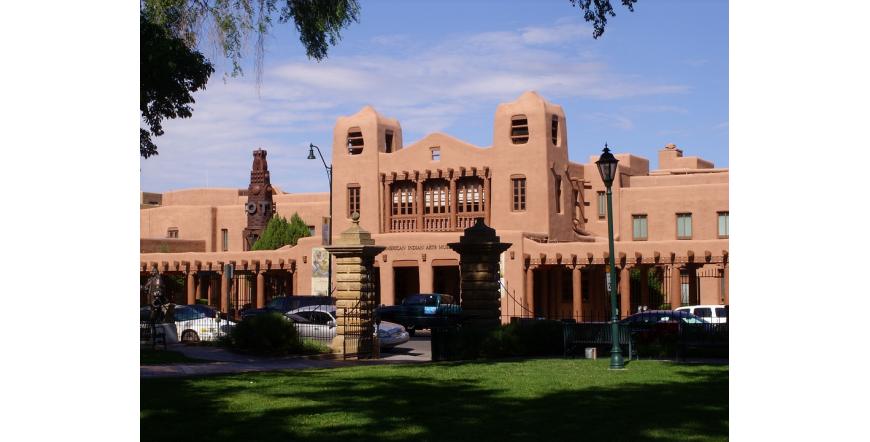 The Palace of Governors in city of Santa Fe is the most ancient and permanently used building in the USA. This long, adobe building, situated in the centre of Santa Fe square was in the centre of remarkable historical events, connected with the joining of New Mexico and Santa Fe to the territory of the USA. Pedro de Peralta was a governor of New Mexico province. He established the town of Santa Fe at the foot of the mountain Sangre de Cristo in 1610 and began the building of the palace. During this period the mighty “New Spain” consisted of the whole southwest part of the USA – the States Texas, Nevada, Utah, Colorado, Arizona, California and New Mexico.

In 1680 the local American Indian tribe “pueblo” raised a rebellion against the Spanish colonizers. The Spanish population of Santa Fe ran away from the rebelling “pueblo”, and the local people accommodated in the palace. In 1692-1693 with don Diego de Vargas leading the Spanish once again conquered Santa Fe and the palace was transformed again into a Governor’s residence.

During the Mexican war for independence (1810-1821) the Mexican conquered the city and Santa Fe became a capital of their territory. And the palace was dwelled by the Mexican. In 1846 the United Stated announced war to Mexico and under the direction of General Kearny Santa Fe was conquered by the American troops. During the Civil war (1861-1865), the Confederation took control over the city and determined the building of the palace for operative headquarters.

In 1909 the Palace of Governors was transformed into a museum of New Mexico, which popularizes the abundant history and culture of the region. There are exposed many exhibits, which reveal the arts and crafts of the southwest local American inhabitants. The Palace of Governors occupies an important place not only in the history of Santa Fe and New Mexico, but also of the United States.

Vote:
Rating 5 from 1 voted The Palace of Governors