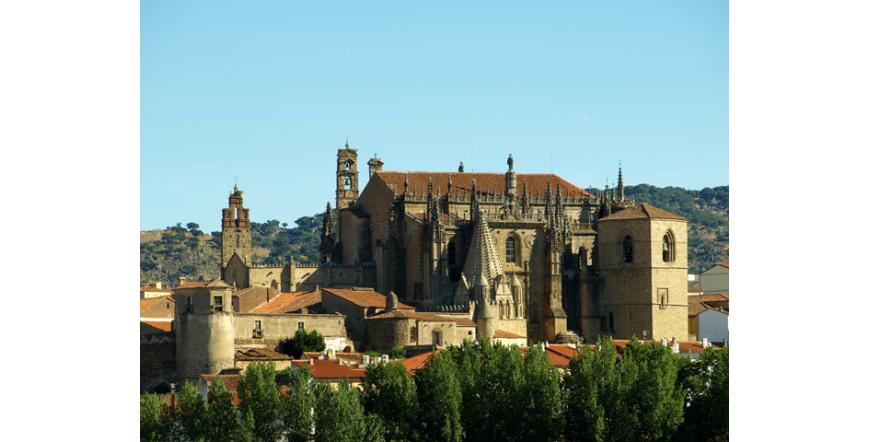 The "Pearl of Jerte" or Placencia is dramatically perched on top of the river, the jagged limestone formations making it an ideal spot for exploring the beautiful valley. To the south lies the delightful agricultural valley of Valle de la Vera and the monastery to which Charles V chose to retire in 1556, weary of the burdens of a vast empire.
Placencia's greatest landmark is the cathedral, which consists of two buildings from two different periods: the old Romanesque-Gothic cathedral from the XIII-XIV centuries, connected by a gallery to the new cathedral. Completed in the Renaissance style at the beginning of the 16th century by some of the best Spanish architects of the time, it is the most ornate church in Extremadura – evidenced by the vault of the San Pablo chapel, the beautiful Platresque north portal, and the sculptures of Gregorio Fernandez for the main altar and the carved thrones in the choir.
In addition to the beautiful residential buildings of the Main Square, which comes alive every Tuesday with the traditional medieval market, the Casa del Dean, the Palacio Episcopal and the Casa de las dos Torres are also worth a visit, and the Ethnographic Museum tells about local rural traditions.
About 1 million trees of over 30 different types of cherries are grown in the beautiful Valle del Jerte. It is impossible to describe the beauty when they bloom in the spring, but it is good for example to visit the area in May, or rather the village of Valdastillias, where you can closely follow all the working processes related to the cherries. Near the village of Jerte is the Reserva Natural Garganta de los Infiernos - an amazing nature reserve with lush waterfalls, offering incredibly exciting, but also difficult hikes.
Continuing northeast from Placencia, the road leads to Tornavacas, the last village before the border with Castilla y León. It is squeezed between the high mountains of Gredos and Behar and has only one main street, on which is the inn where, in 1556, Charles V spent a night on his way to the monastery near Juste in the fertile La Vera valley. He chose this place in the simple Hieronymite Monasterio de Juste to retire, bored with palace life and political intrigue. Despite the apparent simplicity of the place, Charles V was served by around 100 servants and slept in a bedroom built next to the chapel so that he could listen to the service from his bed. In Harandilja, there is the magnificent castle from the 15th century, where Charles V lived while he waited for his rooms to be prepared in Juste.
South-east of Placencia is the Parque Natural de Montfrague, created to protect rare plant and animal species in the region, such as Iberian lynx, wild boar, badger, golden eagle, black storks and numerous vultures.