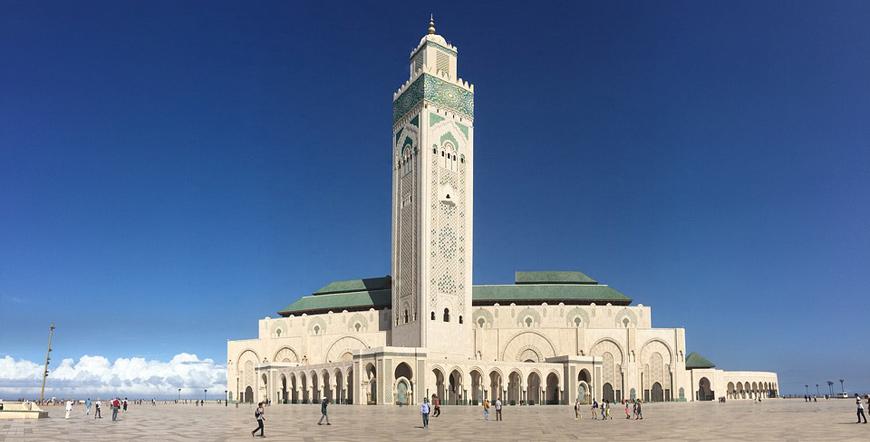 The city of Casablanca is the largest in its eponymous province, as well as being the largest port city on the Atlantic coast of Morocco. It’s known locally as “Casa” and it has grown significantly over the past two decades to become a major player in Moroccan politics, business and culture. However, although it may seem like a modern industrial city with little to offer visitors, Casablanca houses many beautiful old buildings and monuments which reflect its long history. Given its size and importance as a port city, you might be surprised at how much there is to see in Casablanca. The city’s sights range from traditional mosques and synagogues to art galleries and museums. There are also some picturesque parks where you can relax after a day exploring the city’s sights. Here are some of our favorite things to do in Casablanca:

The Hassan II Mosque is one of the most beautiful mosques in the world. Located in the middle of the ocean, it’s impressive not only for its design, but also because of how it was built. Finished in 1993, it was constructed in such a way that each of the mosque’s 26,800 tiles are almost indistinguishable from the water around it. Unfortunately, you can only see it from the inside if you are able to gain admittance to the mosque during the hajj (annual Islamic pilgrimage to Mecca). If you can’t make it for the hajj, you can still see the mosque from the outside.

The Marché des Habous is Casablanca’s oldest market. Dating back to 1907, it’s now a hub for art and craft shops and cafés. There are more than 400 shops in the market, selling everything from handmade crafts and jewelry to clothing. The market is an excellent place to get a feel for Casablancan culture and traditions. If you’re lucky, you might even stumble across a wedding in progress. The market’s central square is also home to a small mosque. You can also see the Mounted Corniche, a famous monument that overlooks the city. The market is open every day between 9 a.m. and 6 p.m.

The Mausoleum of Mohammed V is a traditional Islamic shrine located in Casablanca’s El-Jem neighborhood. Built in 1958, the mausoleum is dedicated to Mohammed V, a former sultan who ruled Morocco from 1912 to 1952. The mausoleum is a beautiful building, decorated with arches and intricate tile work. It’s also worth visiting because it houses much of Mohammed V’s personal belongings. On the same street as the mausoleum are the royal masonry workshops. Dating back to the 16th century, the workshops were built to house the masons who constructed the nearby Hassan Mosque. The workshops are now a museum, housing many examples of traditional Moroccan architecture and crafts.

The old Casablanca fort is one of the city’s most historic buildings. It was built in 1908, making it one of the oldest buildings in Casablanca. The fort was initially built by the Portuguese as a defense against pirates. After the Portuguese left, it was used as a French military fort. Nowadays, it’s a small museum, housing a large collection of cannons and other military artifacts. The fort is open every day between 9 a.m. and 5 p.m. Admission is 5 dirham (about $0.50).

There are a few art galleries in Casablanca, including the Museum of Contemporary Art (CMA). This museum houses a large collection of modern art, including paintings and sculptures by local and international artists. You can also visit one of Casablanca’s many gardens. The Hassan II Mosque Gardens, Mohammed V Gardens and Botanical Gardens are all worth a visit.

The city of Casablanca is a wonderful place to visit. Although it may seem like a modern industrial city on the surface, it also houses many beautiful old buildings and monuments which reflect its long history. Having been a major trading hub since the 10th century, Casablanca is full of culture and history and boasts some truly beautiful sights. If you’re looking for a new city to explore, we highly recommend visiting Casa.