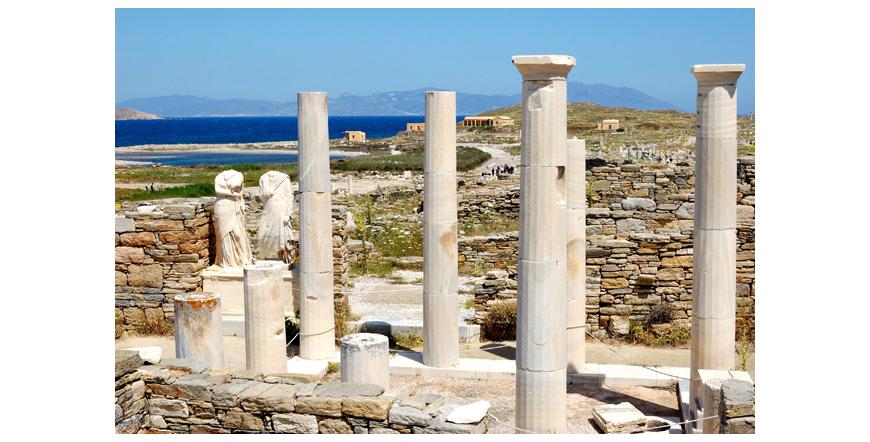 Delos is the smallest island in the Cyclades with a length of 4.5 km and in its widest part is 1.3 km. However, the island is the most important archaeological center not only in the Cyclades, but in Greece at all. Nowadays, the island is reachable through the ancient port, where tens of thousands of slaves were once bought and sold every day. Delos is dissected from north to south by the Inopus River. Nowadays, Delos has no permanent inhabitants, and the island functions as an open-air museum.
Archaeologists have found here the remains of three shrines of Apollo, a temple of Artemis, a temple of the god Triton, a temple of Hera, a Terrace of lions and other sanctuaries. In 1990, UNESCO inscribed Delos on the World Heritage List. According to myths, Leto gave birth to twins Artemis and Apollo on the island. The myth tells that Delos was once a floating island, until Zeus Poseidon locked it in one place so pregnant Leto could hide there and gives birth. For a long time, the small town of Delos was supported only by the income from the temple of Apollo, which had a cult significance.
The religious role of Delos is so great that after 426 BC it was forbidden for the people to give birth and to die. That is why the last hotel on the island of Delos was destroyed 1600 years ago. That is why today tourists cannot spend the night on Delos. There are other interesting facts in the history of Delos. For example, in 167 BC Rome declared Delos a free port, so the trade replaced the religion as the island's main occupation. On this way Delos became the largest slave market in the Mediterranean. But in 88 and 69 BC Delos was looted and lost its treasures, ancient cults lost their significance, and trade roads changed their routes. The decline of Delos began and during the Ottoman rule it was almost deserted.
Today in Delos there is a huge space with fragments of stone to tell what happened. These are the remains of three sanctuaries of Apollo, the temple of Artemis, the temple of the god Triton, the temple of Hera, the Terrace of the Lions, the dried-up Holy Lake and many other ruins and other sanctuaries. In 1990, UNESCO inscribed Delos on the World Heritage List, which includes the Minoan fountain, the Terrace of the lions, the temple of Dionysus, the temples of Isis and Hera, the house of Dionysius and others.
An interesting place to visit is the theater district, where the streets are littered with the remains of artisan houses and houses of merchants, as well as the ruins of a large amphitheater. The slave market is located in the partially excavated Coastal Quarter. The island of Delos is an extremely interesting place and a trip to it must be well organized in order to see the maximum of sights. For a long time, the small town of Delos fed on the income of the temple of Apollo, which had a cult significance.