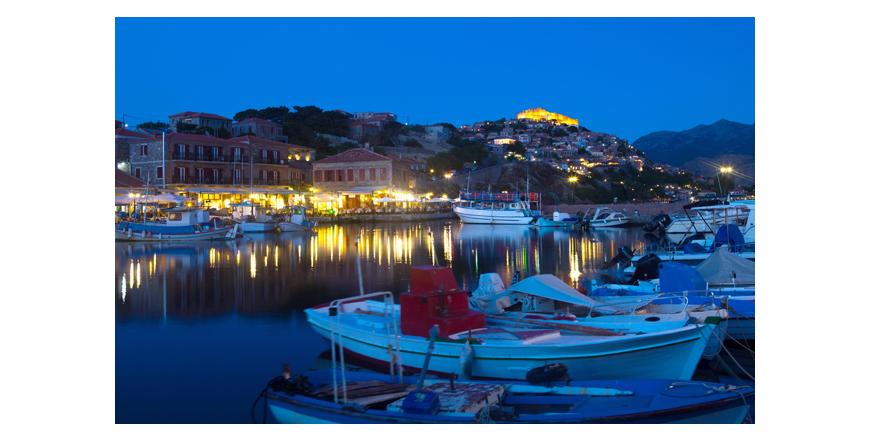 Lesbos is the third largest Greek island and eighth in the Mediterranean with an area of ​​1,630 km2, a 320 km coastline and a population of about 90,000, a third of whom live in the capital Mytilene. The island of Lesbos offers a mild and Mediterranean climate, snow and very low temperatures are rare. The ancient Greek poet Sappho is from the island of Lesbos, and the word lesbian comes from the name of the island. The poet Odysseus Elitis, a descendant of an old family from Lesbos, is a Nobel Prize winner.
Lesbos is located in close proximity to Asia Minor. The island of Lesbos is the third largest Greek island and 8th in the Mediterranean. The rocky landscape with olive groves and sunny beaches attract thousands of tourists from around the world. The largest city on the island of Lesbos is the city of Mytilene, which is also considered the capital of the island. The city of Mytilene is beautifully landed as an amphitheater on two beautiful hills. On one peak is one of the sights of the city - a beautiful ancient castle, which is home to many theatrical performances.
Other popular places in the capital of Lesbos are the still functioning ancient theater, famous for its amazing acoustics, as well as the ancient Greek port, which attracts many tourists, and the beautiful ancient fountains. In contrast to the ancient appearance of Mytilene, modern buildings are erected in the city. The town of Mytilene is also known as the main port of the island. The central part of Mytilene covers a beautiful bay with many yachts and boats.
To be an attractive tourist destination for summer vacations, you must have very nice beaches. The best beach on the island of Lesbos is Skala Eresou beach, which attracts people from all over the world. This beach is famous for its clear water and its soft golden sand. The popularity of Skala Eresou is so great that it is allowed to set up tents by tourists in designated places there are no vacancies in local hotels. The most famous resort on the island of Lesbos is Molyvos, which has a gorgeous beach with soft sand and clear water.

The list of landmarks on the island of Lesbos includes an ancient Byzantine fortress from the VI century BC and the Archaeological Museum, which houses a rich collection of ancient artifacts. Visitors to the island of Lesbos can visit the Theophilos Museum, which was famous for its beautiful paintings. For connoisseurs of works by world-famous artists, the Teriade Museum functions. The ancient church of Agios Terapon has become an attraction for tourists with its incredible interior. The wonder of nature, located on the island of Lesbos - the ancient forest of fossils, which are prehistoric redwoods lying in frozen lava, must be paid attention.