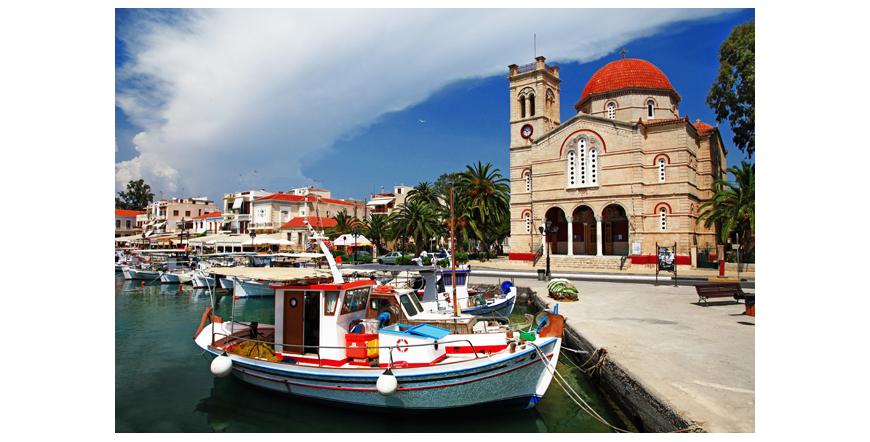 Aegina is the largest Greek island in the Saronic Gulf. It is located about 27 kilometers from Athens. Its location is such that it has contributed much to its naval power in antiquity. According to legend, his name comes from the nymph Aegina, who was abducted by Zeus and transferred to this island. The island of Aegina has the shape of a heart and is a beautiful place suitable for people in love. The island of Aegina is famous for becoming the first capital of Greece after its liberation from Turkish slavery. The island of Aegina is also known for the birth of Plato.
Aegina Island is a great destination for a weekend. The symbol of Aegina is the pistachio, which is sold everywhere and is a major source of money for the population. One of the pearls in the crown of the island of Aegina is the best preserved temple in all of Greece - the temple of Aphaea, built in the V century BC. The beautiful Dorian ensemble is one of the most significant ancient sites on the islands of the Saronic Gulf.
The island of Aegina is not among the mass and popular tourist destinations. This does not mean that Aegina does not have beautiful beaches or lacks any entertainment. There are many beaches, taverns and bars also at very good prices.
The city of Aegina is the capital of the island and is a lively and attractive place with a harbor surrounded by beautiful buildings, cafes and restaurants - the perfect place to immerse yourself in the local atmosphere. An obligatory point on the route for exploring the city should be the archeological museum. An important historical landmark on the island of Aegina is Paleochora. This is a picturesque "ghost" city, which was built in the IX century to be the capital of the island. Unfortunately, today is just a sad sight, revealing destruction, desolation and demolished houses and churches.
On the east coast of the island of Aegina is the largest resort on the island - Agia Marina. Around it and near it are several smaller resorts. The inside of the island of Aegina seems to be a reserved area for a beautiful mountain landscape, in which several churches and monasteries are scattered. There is a huge church which is dedicated to the first Greek saint for the XX century - St. Nectarios.
The coast of western Aegina is also very picturesque and rich in beautiful beaches. There is also a pretty port village of Perdika. From it you can easily reach the uninhabited island of Moni by boat, where one can escape from the dynamics of a busy day and relax on a beautiful beach and swim in the crystal clear waters of the sea.