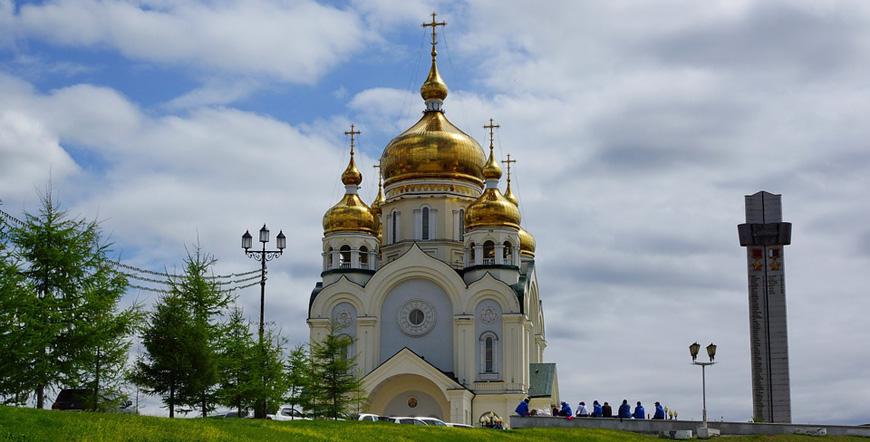 Khabarovsk is one of the largest cities in the Far East with a population of 800,000 people, 8,000 km from Moscow, located 30 km from the border with China. Until 2018, Khabarovsk was the capital of the region until it was replaced by Vladivostok. The city of Khabarovsk was founded in 1880 and is named after the 17th century Russian traveler Erofey Khabarov. The surrounding beautiful nature of the taiga, green hills and full-flowing rivers make it visited by tourists who are attracted by the fact that the city is part of the Trans-Siberian Railway.
In addition, the nearby Chinese city of Fuan is often visited by residents and guests of the city without the need for any visa documents. Assumption Cathedral is one of the important sights of the city of Khabarovsk. Located in the center of the city, it was built in the 19th century, is 50 meters high and impresses with its exterior architecture and interior design. Its seven gilded domes are already visible upon entering the city.
The monument to Erofey Khabarov embodies the courage of Russians and was built for the 100th anniversary of the founding of Khabarovsk. The imposing bronze figure of Erofey Khabarov reaches a height of 4.5 m.
The bridge connecting the two banks of the Amur River dates from 1916 and allows the Trans-Siberian Railway to cross the river without using a ferry to cross the two banks.
The Rock of Khabarovsk is in memory of the 18 Austro-Hungarian musicians who refused to fight against Soviet power. Khabarovsk Regional Museum Grodekov since 1894 has more than 400,000 exhibits telling about the history and culture of the Far East.
Notable is the Japanese Memorial to the 10,000 Japanese soldiers, generals and admirals captured at the end of World War II. The red brick memorial, erected in a small beautiful park, gives the sad impression of the fate of the Japanese prisoners of war who died in the Khabarovsk camps.