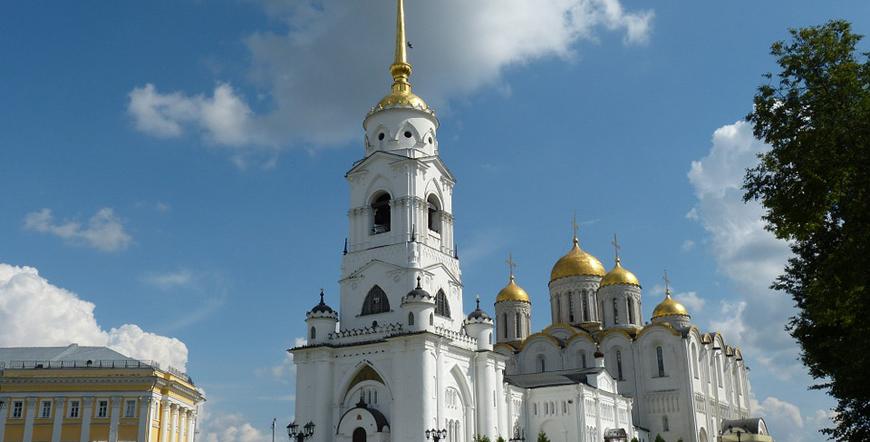 The city of Vladimir is a Russian city with a population of about 300 thousand people, located 200 km from Moscow. Located on the steep left bank of the Klyazma River, the city of Vladimir is a stop on the Trans-Siberian Highway and part of the Golden Ring, a collection of medieval settlements in Central Russia.
The city was founded in 990 on the site of an ancient settlement by Prince Vladimir Svetoslavovich. Due to its convenient geographical location, the city has a powerful natural fortification and a convenient place for the development of trade. Becoming a center of princely power in the northern part of Russia, Vladimir became the capital of Northern Russia. During the reign of Prince Andrey Bogolyubsky, the borders of the city were expanded. The Volozhka Gate was built on the Klyazma River, through which merchants crossed to the Volga River. The Golden Gate was built in the center of Vladimir, and the Silver Gate was built at the opposite end. At that time, white stone construction began in the city of Vladimir.
In 1158, the construction of the Assumption Cathedral began, which rivaled the cathedrals in Kyiv and Novgorod in grandeur. The beautiful Church of the Intercession of Nerli, the remarkable palace ensemble and the new princely palace make the city of Vladimir the center of the cultural, economic and political life of Russia. Under the rule of Prince Vsevolod in 1176, the city enjoyed peace, prosperity and wealth , and had the strongest army in Russia. In the annals of those times, Prince Vsevolod was depicted as the most powerful and powerful Russian prince, and the majestic buildings of the city of Vladimir became models for the construction of other such in Russian cities. But in the 13th century, the wild Mongol hordes reached the city of Vladimir, and only part of the Dormition and Dimitriev Cathedrals and the Golden Gate remained from the magnificent city with richly decorated buildings.
One of the most important landmarks of the city of Vladimir is the majestic five-domed Assumption Cathedral, which was conceived as the last home of the grand princes and at the same time dedicated to the holy icon of the Virgin of Vladimir, brought by Prince Andrey Bogolyubsky. The cathedral was built in 1158, and the painting was entrusted to the famous Russian icon painter Andrei Rublev, considered one of the greatest medieval artists of Orthodox Christian icons and frescoes. Some of the icons of the Assumption Cathedral are exhibited in the Tretyakov Gallery in Moscow and the Russian Museum in St. Petersburg.
The Cathedral "St. Dimitar" is the other landmark of the city. Built in 1194 as a private chapel of Prince Vsevolod, it is famous for the biblical scenes from the story of King David masterfully carved on the white stone.
The amazing Golden Gate, built in 1158, is the only preserved ancient Russian gate. But by the end of the 18th century, its structure had deteriorated so much that Catherine the Great was afraid to walk through the arch. That is why she was the one who ordered drawings for the restoration of this valuable cultural monument. The museum inside focuses on the history of the Mongol invasion of Russia in the 13th century.
The wide streets, the beautiful central square with lots of greenery are pleasant places to walk in this interesting city as part of the Trans-Siberian Railway experiences.