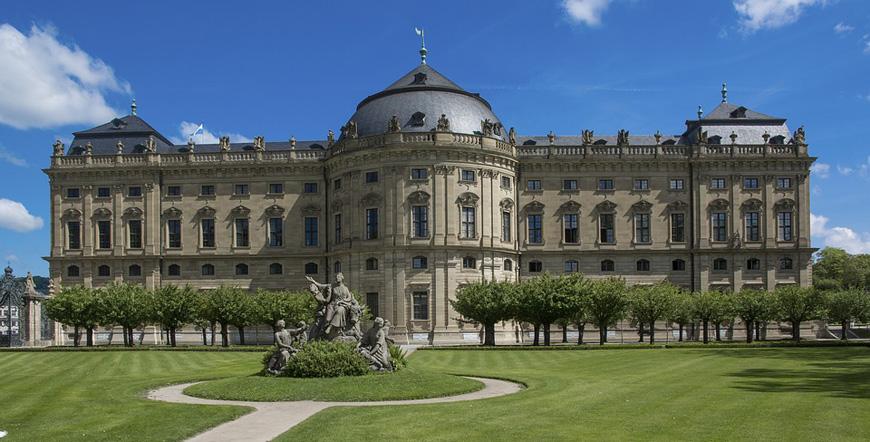 Würzburg Residence - the episcopal residence of princes in Würzburg is said to be "one of the most resplendent royal courts in Europe" and architect Balthazar Neumann's greatest achievement. Located in the center of the city, the Würzburg Residence was built during the Schönbronn period from 1720 to 1744 and is a masterpiece of South German Baroque, compared to palaces in Vienna and the Palace of Versailles in Paris. Because of its grandeur and opulence, the Würzburg Residence has been included in the UNESCO World and Cultural Heritage List since 1981.
After nearly 300 years of residence in the Marienberg fortress, rising high on the west bank of the river Main, Friedrich Carl von Schönbronn's ambitions for extravagance and splendor laid the groundwork for the new palace. The Würzburg Residence was the work of a constellation of architects and artists, sculptors and builders working under the direction of chief architect Neumann.
Although it was almost destroyed during the Second World War, the restoration of the Bishop's Palace began as early as 1945 and shines with the same charm and elegance. The Würzburg Residence measures 167 m by 92 m and consists mainly of two side wings and a magnificent balcony above the three portals. The Würzburg Residence has four floors and has 400 rooms. As soon as you enter from the main portal, you are greeted by the unique double staircase. Its lowest part comes from the reception hall and is divided into two curved white staircases with railings.
Thus, the host from the upper landing is the first to see his guests, and when visitors turn to the host, then they see the unique vaulted ceiling with frescoes by the Venetian artist Giovanni Battista Tiepolo, described as "Europe's greatest decorative painter of the 18th century as well as the most able master". This is one of the largest frescoes in the world, where the artist has depicted the typical of the continents of Europe, Asia, America and Africa. And in one corner of the wonderful ceiling is a self-portrait of Tiepolo.
The other masterpiece of the Würzburg Residence is the Rococo White Hall with a special kind of white stucco on a light gray background, by Antonio Bossi. The large number of rocaille decorations with an abundance of curves, wavy elements and real objects give the hall a solemnity together with the five crystal chandeliers. The White Hall was intended for receptions.
The Imperial Hall is lavishly decorated and was used to welcome visiting dignitaries. The walls are in shades of red, white and yellow and the dome is painted white and decorated with a magnificent fresco by Tiepolo representing the marriage of Emperor Frederick I Barbarossa and Countess Beatrix of Burgundy.
The Court Chapel or Hofkirche is an excellent example of the sacral Baroque style and stretches across the two main floors of the Bishop's Palace. The columns are made of colored marble, and the side altars are designed by Hildebrand, but painted by Tiepolo. The special plaster of the high altar resembles marble and is the work of Antonio Bossi.
The gardens of the palace are stepped, which creates a feeling of a special landscape. The later additions of vases, urns and two monumental sculptural groups, the beautifully trimmed green bushes, make the gardens unique.
Würzburg's biggest landmark, the Würzburg Residence is a must-visit as part of the Romantic Road, because you will definitely feel the whiff of that distant time.